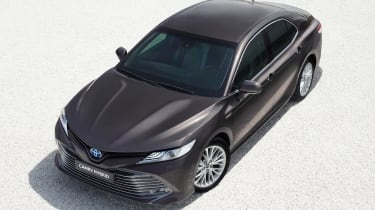 Prices for the all-new Toyota Camry range have been revealed. The Camry, which is only available as a hybrid, starts at £29,995 and is available to order from Monday 1st April.

The Camry effectively replaces the Avensis saloon but has a higher starting price, partly because there aren’t any pure petrol or diesel models available. Toyota has equipped the Camry to take on high-spec versions of the Vauxhall Insignia Grand Sport and Skoda Superb, as well as cars like the Audi A4 and Mercedes C-Class.

Best hybrid cars you can buy 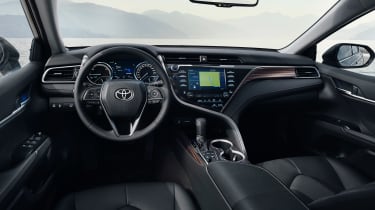 Step up to Excel trim, and Toyota will also throw in blind-spot monitoring, rear cross-traffic alert and lane-change assist. The Excel model also features 18-inch alloys, each with 20 spokes, plus LED projector headlights and wireless phone charging. The Excel model starts at £31,295 before any optional extras. Five paint colours are offered across both trim levels, including ‘Platinum White Pearl’ and ‘Graphite Shadow’.

The Toyota Camry nameplate has been absent from the UK for over a decade. It formerly belonged to Toyota's largest, most luxurious saloon – a car one size bigger than the Avensis of the time. The 2019 Camry promises to be an altogether more hi-tech car, with a 'self-charging' hybrid system.

Based on a variation of the Toyota New Global Architecture (TNGA) platform that also underpins the latest Toyota Prius, Toyota Auris and Toyota C-HR crossover, the Camry will combine a 2.5-litre petrol engine with a battery and electric motor. Toyota claims the new model will share the “fun-to-drive dynamic qualities" of its stablemates, with ride and handling "specifically tuned for the European market".

The hybrid combination produces 215bhp and official fuel economy figures of between 50.5 and 53.3mpg on the new WLTP cycle. Its CO2 emissions are rated at between 98 and 101g/km, but these figures are from the old and unrealistic NEDC cycle, so the real-world numbers may be higher.

The Camry's arrival brings Toyota's hybrid car line-up to eight models, ranging from the Toyota Yaris Hybrid supermini to the Toyota RAV4 SUV. Toyota isn't the only brand to be placing a strong emphasis on electrified cars – the latest Volvo S60 will be available only in petrol and hybrid form. 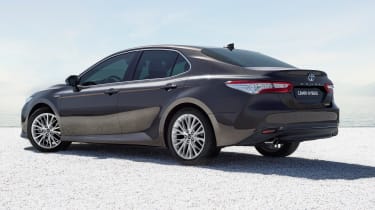 The British-built Toyota Avensis went into production in 2009, with updates in 2012 and 2015. The decision to end Avensis production came as a result of falling sales in the large saloon car market – although the all-new Peugeot 508 demonstrates that not every manufacturer is ready to give up in this category just yet. Toyota's plant in Derbyshire won't fall silent with the passing of the Avensis, though – it's set to become the home of Toyota Corolla production.

What can buyers expect from the new Toyota Camry? Well, it's a sister model to the next-generation Lexus ES, a front-wheel-drive model that is replacing the rear-drive Lexus GS later in 2019. Toyota promises plentiful interior space, with a curving, "driver-focused" dashboard.