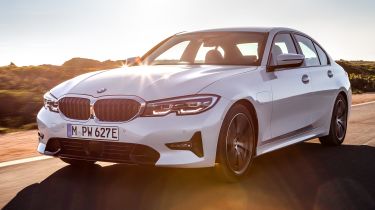 The 330e comes at a time when electrified car sales are increasing yet petrol and diesel car sales continue to slide. It also provides 3 Series buyers with an economical option to contrast with the high-performance 369bhp M340i that was recently announced.

BMW promises that the 330e will be anything but a slow car. It’s claimed it can complete 0-62mph in six seconds, thanks to a clever XtraBoost feature that operates when Sport mode is engaged. A turbocharged 2.0-litre petrol engine produces 182bhp, combined with a 67bhp electric motor to provide 249bhp in total. XtraBoost uses additional power from the car's 12kWh battery pack to increase total system power to 289bhp in short bursts. A "suitably throaty engine noise" is also promised when full power is used. 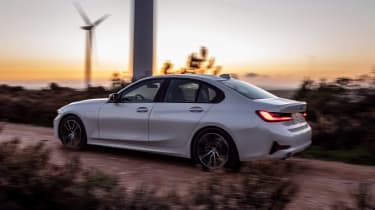 While enthusiastic drivers should enjoy the spritely performance, impressive fuel economy will remain a big selling point for the 330e – especially among those who make frequent short urban journeys. The BMW's claimed all-electric range of 37 miles, which is 12 miles up on the previous 330e, will be enough for many to complete a daily door-to-door commute.

The increased range also results in an impressive 138mpg fuel economy figure and low 38g/km CO2 emissions, although these figures will only be achieved by those who can make full use of the car's all-electric mode. Owners using the car for longer trips are likely to experience economy rather more like that of a conventional petrol car, although a top speed of 68mph on electric power alone means zero-emissions running isn't reserved for slow-moving and stop-start traffic conditions.

As well as the changes under its bonnet, the 330e has a slightly smaller boot than petrol and diesel 3 Series models; it shrinks from 480 to 375 litres in order to make space for the hybrid system's battery pack beneath the boot floor. In traditional BMW 3 Series style, the 330e retains rear wheel drive. An eight-speed Steptronic automatic gearbox is standard.

BMW has yet to announce pricing for the 330e plug-in hybrid, but it's sensible to expect it to cost slightly more than the outgoing model. A figure around £40,000 is likely, and SE, Sport and M Sport trim levels will be available when sales begin in July 2019.