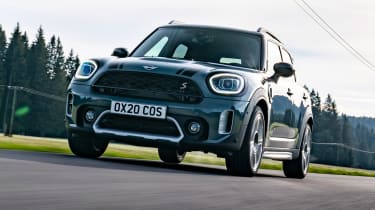 The facelifted MINI Countryman was unveiled earlier this year and now the range-topping John Cooper Works (JCW) performance model has been revealed.

At the top of the Countryman range is the JCW model, which has 302bhp and gets from 0-62mph in just 5.1 seconds. An eight-speed automatic gearbox and all-wheel drive are standard, along with upgraded suspension and brakes.

The facelift brings the same front and rear lights as the rest of the range but there’s a fresh front grille and larger exhaust pipes than before. Two new paint colours are available, and you can still choose a wide range of graphics packs and colourful add-ons to make the JCW even more distinctive. Various exterior elements are painted red, such as the brake calipers and grille stripe. 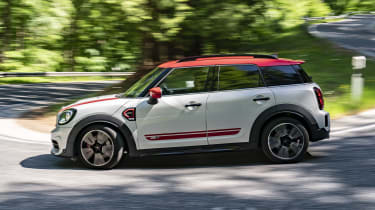 The Countryman JCW was seen as a rather niche offering in the past, but the number of performance SUVs on offer has exploded recently, so it can now count the Cupra Ateca, Volkswagen T-Roc R, Audi SQ2, BMW X2 M35i and Mercedes-AMG GLA 35 as rivals. The Countryman JCW costs £36,000 and is available to order now.

The facelifted MINI Countryman range includes tweaks to the engines, on-board technology and design. The car is available to order now for a starting price of £24,295, with first deliveries scheduled for August. It shares a platform with several BMW models, and will continue to rival upmarket SUVs like the Audi Q2, Volvo XC40, BMW X1 and Mercedes GLA.

As is common with midlife facelifts, the Countryman gets new bumpers and a new redesigned grille, plus a couple of extra paint options and the choice of 19-inch alloy wheels. The Countryman will be the last model to get MINI’s bold Union Jack LED tail-lights. 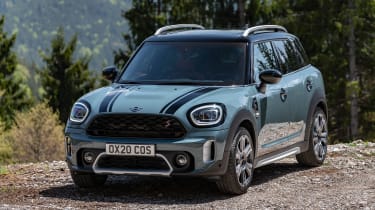 The interior changes are very similar to those already seen in the latest MINI Clubman. The 2020 Countryman will feature an upgraded infotainment system (measuring either 6.5 or eight inches), sat nav, Apple CarPlay, MINI-branded puddle lighting and a customisable ambient lighting system. Buyers now get auto-dipping LED headlights as standard and the five-inch digital instrument cluster found in the MINI Electric.

The customisation offered to buyers has always been a key strength of the MINI brand, and the revised Countryman does indeed feature even more options; besides the paint and wheels, you’ll also be able to choose different trim options and two new colours for the leather upholstery. Matrix LED headlights could be an option for range-topping models.

The engine range of the current Countryman isn’t receiving many changes, other than minor tweaks for improved economy and emissions results. It kicks off with a 134bhp 1.5-litre three-cylinder petrol engine, or you can choose from a 148bhp 2.0-litre diesel engine (badged Cooper D) or the petrol Cooper S model, which now offers 176bhp instead of 189bhp. There’s also the plug-in hybrid MINI Countryman Cooper S E All4 hybrid version, and the JCW model mentioned above.

The revised Countryman will continue to be available in two or four-wheel drive with a six-speed manual or an eight-speed automatic gearbox. The Countryman PHEV will come as standard with four-wheel drive, with the rear wheels driven by an electric motor. 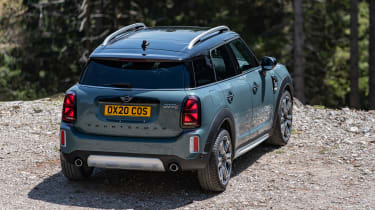 MINI hasn’t given the Countryman major changes in this midlife facelift; instead, the updates will be just enough to keep it fresh. We don’t expect that every buyer will even notice the differences and, unless you’ve been holding out to get Union Jack tail-lights, the pre-facelift model will be just as good for most buyers. Dealers will want to shift their existing Countryman stock before the updated car comes in, so look out for offers.

Interested in knowing more about the MINI Countryman? Read our review for more information.