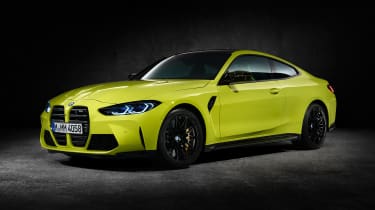 The 2021 BMW M4 Competition Coupe has been officially unveiled. The new flagship model features the same polarising kidney grille design as the 4 Series Coupe, and is powered by a 503bhp twin-turbo petrol engine. Sales are due to start in March 2021, with prices set to be confirmed in the coming months. The new M4 has been revealed alongside the mechanically identical BMW M3 saloon. 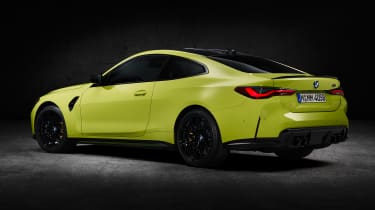 After lots of teasers and spy shots, the radical styling of the new M4 is still punchy and impactful, especially in the new Sao Paulo Yellow paint finish shown in these photos. Like the 4 Series Coupe, the front is dominated by two full-height kidney grilles, but the M4 also gets larger air vents and horizontal grille slats. At the rear there’s a carbon lip spoiler on the tailgate, plus a widened rear diffuser encompassing four 100mm-wide exhaust pipes. 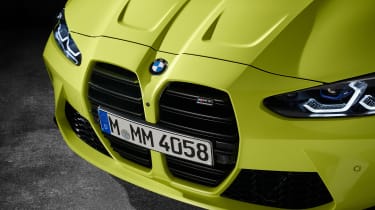 M-specific styling touches include darkened light clusters, exclusive wing mirrors and widened arches. The lightweight alloy wheels measure 19 inches at the front and 20 inches at the rear, while the roof is made from carbon fibre reinforced plastic (CFRP) to help reduce weight. The yellow paint hue shown here is one of four new colours, and you can choose red, black or blue brake calipers. 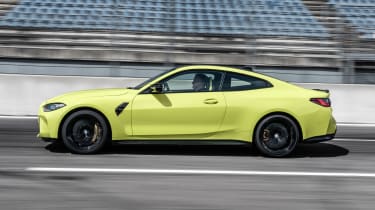 Under the bonnet will be a 3.0-litre six-cylinder petrol engine with two turbochargers. The M4 Competition (the only model coming to the UK) produces 503bhp and is only available with an eight-speed automatic gearbox, while other European countries will get a base model with 473bhp and a six-speed manual. For now, it’s rear-wheel-drive only, but a version with BMW’s xDrive all-wheel drive system is set to join the range in summer 2021. The all-wheel-drive system will allow all of the power to be sent to the rear wheels in some situations, such as when you disengage the traction control.

The Competition spec car sprints from 0-62mph in 3.9 seconds and has an electronically limited top speed of 155mph - but you can reach 180mph if you spec the optional M Pro Package. Fuel economy is clearly a secondary consideration; you can expect 27.7mpg when you’re not driving quickly. CO2 emissions start at 234g/km. 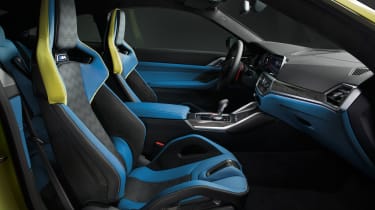 The interior is also going to be shared with the next M3 and features a cleaner look than the current car - although the blue and yellow colour scheme of this car is an acquired taste. Many functions will be controlled by the latest version of BMW’s iDrive infotainment system, on a large 10.25-inch touchscreen, while analogue dials will be replaced by a 12.3-inch digital instrument cluster with M Performance graphics.

Like the exterior, there are several exclusive interior details, such as the M steering wheel with red mode buttons and Merino leather-trimmed sports seats along with carbon fibre interior trim. Buyers can also spec optional carbon-fibre bucket seats, which are 10kg lighter than the standard front seats.

Read our review of the current BMW M4 or check out our latest news about the next-generation BMW M3. 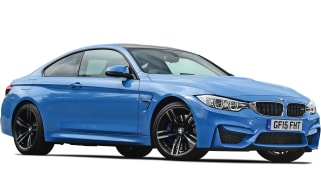