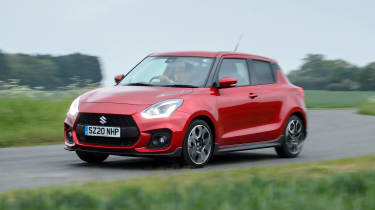 The updated Suzuki Swift Sport is now available to order and comes with a mild-hybrid powertrain. The Swift Sport also features some extra standard equipment but the price has shot up to £21,570 - over £3,500 more than when the car went on sale in 2018.

The mild-hybrid technology is fitted in a bid to reduce carbon dioxide emissions and fuel consumption. As before, the Swift Sport is powered by a 1.4-litre turbocharged petrol engine borrowed from the Suzuki Vitara, with power going to the front wheels through a six-speed manual gearbox. It’s now fitted with a 48-volt starter-generator and a small battery pack which, we’re told, only adds 15kg to the Swift’s weight.

Zero-to-62mph takes 9.1 seconds (a second slower than before) but top speed is identical at 130mph. The changes are because the new Suzuki Swift Sport is roughly 10bhp down on the non-hybrid model, producing 128bhp. 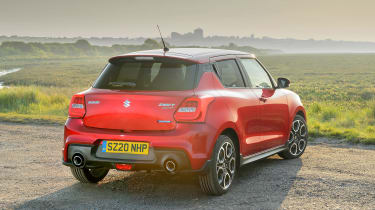 The addition of the electrical assistance sees CO2 emissions drop from 135g/km to 127g/km, and there’s a similarly small fuel economy increase too. You can now hope to get up to 50.1mpg, compared to 47mpg currently. The stop-start system cuts in sooner than before, to help with efficiency, and it also assists the engine during hard acceleration.

Suzuki has given the new Swift Sport a shorter gearchange mechanism to improve the driving experience, and at the same time has decided to offer a number of extra features, including LED headlights, automatic air conditioning, front fog lights, a six-speaker stereo and more safety kit. As with the current car, the updated Swift Sport gets 17-inch alloy wheels, rear privacy glass and a much more aggressive look than the rest of the Swift range. Six paint colours, five of which are metallic, are available cost-free, but you can upgrade to a black roof and door mirrors for £165.

The Suzuki Vitara and Suzuki S-Cross have also received the same mild-hybrid powertrain.

We applaud Suzuki’s quest to reduce its CO2 emissions but the Swift Sport is harder to recommend as a result of the consequent price hike. It’s just £200 cheaper than the starting price of the Ford Fiesta ST, which, with 197bhp, is much more powerful (and our best hot hatchback). Suzuki’s warm hatchback is a closer rival to the 138bhp Ford Fiesta ST-Line, which is over £1,000 cheaper, more spacious and more powerful, and just as economical.