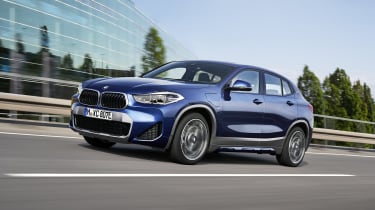 The BMW X2 will soon be available as a plug-in hybrid (PHEV) model called the X2 xDrive25e. It will go on sale in July with a starting price of £37,885. Using the same mechanicals as the BMW X1 xDrive25e, the X2 will rival other premium hybrid SUVs like the Volvo XC40 T5 Recharge, the MINI Countryman Cooper S E All4 and the Lexus UX.

Like the MINI, the BMW X2 xDrive25e uses a 1.5-litre petrol engine coupled with an electric motor and a 10kWh battery. Together, the system produces 217bhp and allows a 0-62mph time of 6.8 seconds. Four-wheel drive comes from the petrol engine powering the front wheels and the electric motor sitting on the rear axle, and is signified by the xDrive badge.

BMW claims up to 148.7mpg is possible but this will entirely depend on how you use the car, and every owner may see different figures. Getting near that lofty fuel economy figure relies on the use of battery power for most journeys. A full charge will give you an electric driving range of up to 35 miles (the average commute for UK drivers is 30 miles a day), while business users will appreciate the much lower Benefit-in-Kind (BiK) tax cost compared to a standard petrol or diesel X2. 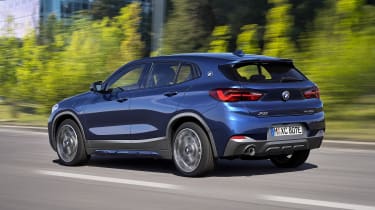 Recharging the battery takes about five hours from a normal plug socket, while buying a BMW i wallbox reduces this to just over three hours. BMW also provides access to a charging card, which can be used with most public charging networks. As is the case with the hybrid BMW X1, you can choose from ‘Auto’, ‘Save Battery’ or ‘Max eDrive’ modes to either use the battery or save it for later in your journey.

There’s a small practicality reduction in the plug-in hybrid X2 xDrive25e; you get 410 litres of boot space compared to 470 litres in petrol and diesel variants. Folding the 40:20:40 rear seats increases the space to 1,290 litres.

Full UK prices and specs are yet to be revealed, but German-market cars get 17-inch alloy wheels, two-zone air conditioning and a companion smartphone app as standard. There’ll also be a noise emitted when you’re driving on electric power to warn pedestrians of the car’s presence. UK buyers will get the choice of Sport, M Sport and M Sport X trim levels.

As with all facelifted X2 models, the PHEV will get a tweaked front end with new standard-fit LED headlights. These now incorporate the fog lights, giving the bumper a cleaner look.

Read our review of the BMW X2 for more details. 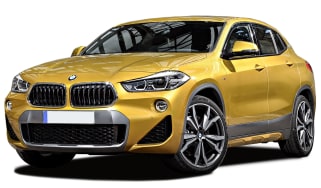 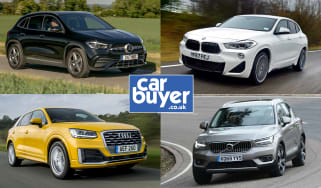