“The e-NV200 Combi is currently the only zero-emissions MPV, with very low running costs and some clever features, but it’s also rather van-like to drive”

As a fully electric MPV, the Nissan e-NV200 Combi pretty much sits in a class of one. Until relatively recently, most electric cars have been smaller hatchbacks and city cars and, although the Tesla Model X can carry seven, it’s more of a luxury SUV than a full-size MPV, costing three times as much. Essentially, the e-NV200 Combi is exactly the same as the Nissan e-NV200 van, but with seats in the back instead of a large load space.

There’s no doubting, then, that the e-NV200 Combi is the most practical electric car there is, but it doesn’t sport the same sleek styling as other electric cars like the BMW i3 or Nissan Leaf. Instead, it looks very much like what it is: a van with seats in the back, only distinguished by tinted side windows and blue badging. It looks even boxier than conventional MPV rivals like the Volkswagen Touran, SEAT Alhambra and Ford Galaxy.

But this very shape aids load space, with the five-seat model capable of holding between 2,270 and 3,100 litres of luggage, depending on whether or not you have the rear seats in place.

Unfortunately, the Nissan’s not particularly great to drive, either. The extra weight of the batteries blunts performance, while the ride is firm and won’t entertain much in corners. However, because it’s designed mainly as urban transport for up to seven people, this won’t worry too many owners.

At the start of 2018, the e-NV200 received a big upgrade in the form of the latest 40kWh battery pack, originally developed for the second-generation Nissan Leaf. This replaces the 24kWh battery and boosts driving range by a significant 60%, making buying an electric MPV viable for a much broader swathe of customers.

According to the latest WLTP testing figures, designed to better replicate real-world driving, you should see around 125 miles from a charge, rising to 188 miles in city driving. For many families, that should be enough to take care of the school run for a week.

Like all EVs, the e-NV200 will be very cheap to run

In common with all electric vehicles, the Nissan e-NV200 Combi will be significantly cheaper to run on a day-to-day basis than petrol or diesel-engined alternatives, as well as being exempt from road tax. The problem is it can be more expensive to buy in the first place – with the seven-seat version costing as much as a well-specced and faster petrol or diesel MPV, even after the £4,500 government electric-car grant has been deducted.

You can reduce that initial hit by choosing to rent the car's batteries for a monthly fee, depending on your expected mileage and ownership period. This takes the list price down and also guarantees the battery pack. 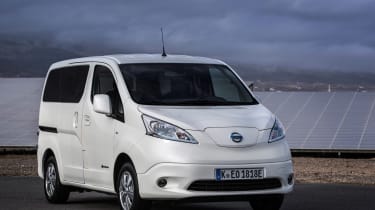 Nissan calls the e-NV200 a “game changer” and with more and more city centres looking to restrict or ban petrol and diesel cars and vans to reduce pollution, it’s not hard to see why. Nissan is ideally placed to cater to taxi firms and businesses looking for a zero-emissions alternative – and savvy families wanting the same. Free access to the London Congestion Charge zone is likely to be just the tip of the iceberg in the coming years.

Convenience will also be boosted by the ability to charge the battery pack by around 80% in just 40 minutes using a public rapid charger, while a dedicated home wallbox will fully charge the e-NV200 in 7.5 hours. Recharging from a standard three-pin plug takes considerably longer – around 21.5 hours.

We've become used to electric cars being good fun to drive, as they're generally quite small and agile and respond instantly to a prod of the accelerator thanks to the nature of electric motors. But the e-NV200 changes that picture somewhat, as it's heavier and less aerodynamic than EVs like the Leaf, so its performance is a bit blunted. Accelerating from 0-62mph takes 14 seconds, but the e-NV200 is at is best below 40mph in urban driving, where it’s fairly easy to keep up with other traffic. 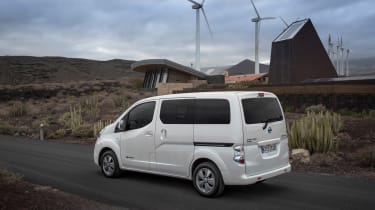 The upright driving position leaves you in no doubt you're in a car based on a van and it's not the most agile thing in corners, either. Overall, the e-NV200 is well suited to gentle town driving, but feels strained on the motorway and clumsy on a country road.

Comfortable inside, but material quality is in line with the e-NV200 van the Combi is based on

The third-row seats can be tricky to access for adults, but in general there's plenty of room for you and your passengers to stretch out in the Nissan e-NV200 Combi's comfortable seats. However, the quality of materials and finishes used betray the fact that this model is based on a van. 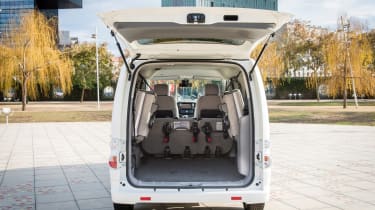 It's a bit nondescript and can't come close to the classy, posh cabin you get in a Volkswagen Sharan. On the plus side, the dashboard controls are logically laid-out and easy to get used to, plus the Combi has some clever features, allowing you to do things like track past journeys, check the battery status and even set the climate control remotely using the Nissan Connect EV smartphone app.

The e-NV200 has very generous passenger and luggage capacity

The e-NV200 Combi is at its most practical and versatile in seven-seater form. This gives you the choice of additional passenger or luggage space when you need it. If you go for the five-seater version, you're stuck with the same passenger capacity as a hatchback, plus a very large boot whether you need it or not. 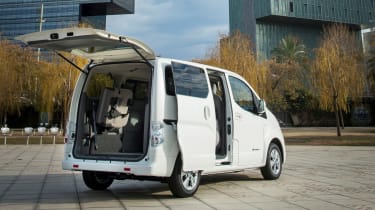 In the seven-seater, you get 870 litres when all the seats are in use, while folding the two third-row seats to the side and tumbling the second row forwards frees up a cavernous 2,940 litres – 601 litres more than the Ford Galaxy offers. The second row of seats also splits 60:40 for added versatility.

One advantage of the Combi being based on the e-NV200 van is that there's no boot lip, so you can easily slide in big or heavy boxes, while sliding side doors make access easy, even in restrictive car parks. There’s no intrusion from the battery pack, as this is positioned under the floor. Less impressive is the interior storage – cubbies are few and far between and the glovebox is smaller than average.

EVs are generally reliable, but the e-NV200's Euro NCAP crash-test score is worrying

The e-NV200 lacks advanced safety systems such as automatic braking or lane-departure warning, but you do get traction control, tyre-pressure monitoring and a full complement of airbags, including curtain airbags. It received a below-par three out of five stars in Euro NCAP crash-testing – indicative of its commercial-vehicle origins and caused mainly by the lack of hi-tech safety kit. Whiplash protection for adult occupants was described as 'marginal'. 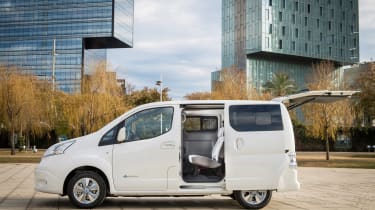 Electric vehicles tend to be very reliable, as they have few moving parts compared to petrol or diesel-engined cars. The one area of concern is battery performance potentially degrading over time – however renting the batteries from Nissan on a monthly basis protects you against this. There have also been few concerns reported with older e-NV200 and Leaf battery packs, many of which have now been used extensively, so initial fears have largely subsided.

'Rapid' and 'Rapid Plus' don't refer to the speed of the car or power of the electric motor – instead, they indicate the presence of faster charging capability, allowing you to top up the batteries and get back on the road sooner. 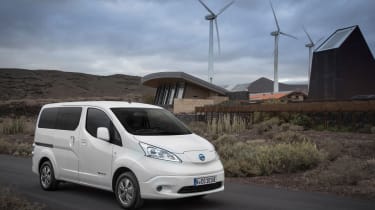 Tekna Rapid has the rapid charging port and adds front foglamps, the infotainment and sat-nav system, a four-speaker stereo, heated front seats, a heated steering wheel and heated mirrors. Tekna Rapid is also the first model in the range with the option of seven seats.

The range-topping Tekna Rapid Plus has the fast charging point, like the Acenta Rapid Plus. 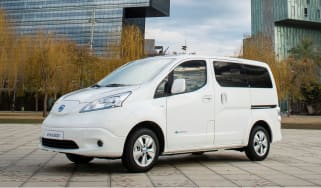 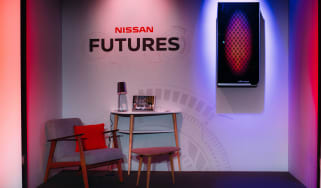