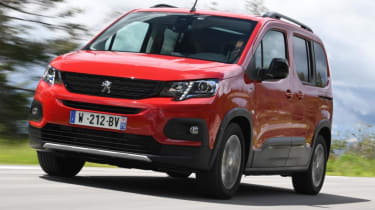 In an age where nothing seems allowed to be merely a car, but an extension of your lifestyle and personality, the Peugeot Rifter is a breath of fresh air. The Rifter, along with its sister models the Citroen Berlingo and Vauxhall Combi Life, make no apologies for their simple, utilitarian nature. They're based on small commercial vehicles, designed to suit the needs of independent traders, delivery companies and other businesses.

For these buyers, practicality is a must, with affordability, value and fuel economy similarly important. These factors are appealing to families, too, and the Rifter – which replaces the Peugeot Partner Tepee – adds a welcome touch of style to that mix. There's more than a hint of SUV muscle to its stance, with grey cladding to its sills and wheelarch surrounds, as well as a metallic section to the lower front bumper in the style of a rock-guard.

In truth, it was always going to be a bit of a stretch to apply SUV style to what's essentially a van, but Rifter is actually a handsome enough machine to be accepted in its own right. The body surfaces are nicely sculpted, with feature contours above each wheelarch, and a side window treatment that could have been more forgettable than it actually is. Peugeot's latest corporate nose treatment looks at home, too, and hangs together well with the Rifter's 'smiling' bumper intake and slatted lower grille.

The Rifter is nominally front-wheel drive (a four-wheel-drive version may join the range later), but that SUV-style garnish isn't just for show – in fact, it could well prove one of this practical family car's greatest assets in taking on the rough-and-tumble of urban life. The grey plastic parts should shrug off dings from car doors and errant shopping trolleys and its impressive ground clearance means city potholes shouldn't cause drama. Both the standard and long-wheelbase versions can be specified with five or seven seats; we'd only recommend the longer car if you frequently have large cargo loads to shift.

Rifter buyers can choose from a number of petrol and diesel engines that are familiar from other models in the Peugeot and Citroen ranges and there are rumours of an electric model – although that may be offered in van form only. With its commercial-vehicle origins, safety will be a higher priority than active driver assistance – so don't expect semi-autonomous technology. Euro NCAP awarded the Rifter four stars out of five.

Peugeot has yet to publish fuel-economy figures for the whole Rifter range, but the 128bhp BlueHDi 130 diesel – an engine that has no trouble pushing this bulky, bluff-fronted machine through the air – returns a claimed 65.7mpg. Less powerful 74 and 99bhp BlueHDi 75 and BlueHDi 100 diesel models are also offered, along with 1.2-litre PureTech three-cylinder petrols with 109 or 128bhp.

Other running costs are unlikely to be ruinous, either – Peugeot offers service packages that make it easy to keep track of your car's annual maintenance needs. Tyres, brakes and other consumables need to be affordable to please small businesses, too – pricey parts erode profits, which is the last thing a Rifter's commercial operators want. Peugeot's UK warranty runs for three years or 60,000 miles and can be extended as long as that mileage limit isn't exceeded.

The Association of British Insurers (ABI) has yet to announce insurance-group ratings for the Rifter, but they're unlikely change much from the Partner Tepee's – these started in group 10 for the entry-level petrol, rising to 18 for the most powerful diesel.

It wallows and rolls when driven hard, but sedate Rifter driving is comfy and smooth

You can probably get a reasonable idea of how the Peugeot Rifter drives simply by looking at it – it's clearly not going to respond in corners like a sports car. Maintain realistic expectations, though, and the Rifter is thoroughly enjoyable to drive. It may be a beast of burden designed with commercial drivers in mind, but it certainly isn't all work, no play.

Only the most powerful of Rifter engines – the 128bhp BlueHDi 130 diesel or BlueTech petrol of the same power – offer enough grunt to really expose its handling limits. If you do overcook things, the front end will run wide a little untidily, but all drama evaporates if you simply lift off the accelerator. Full power is best reserved for when it's really needed, such as when joining fast-moving motorway traffic or overtaking tractors on a country road. 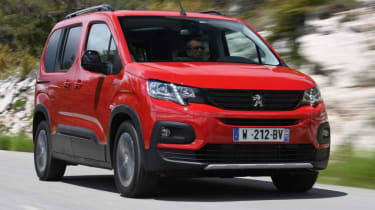 With a body that leans noticeably in corners, there's little point in pushing the Rifter too hard on country lanes anyway. Refrain from mischief, though, and you'll find the steering to be rewardingly accurate and with a real sense of connection to the road; the overall roadholding is just as sound as any other model that shares the Rifter's chassis – the EMP2 platform that can be found under the Citroen C4 Picasso and impressive Peugeot 508 hatchback.

Compared to the BlueHDi 130 diesel, the 109bhp PureTech petrol engine feels rather less happy under the weight of the Rifter, although the 128bhp version might be different. The latter comes with an eight-speed automatic gearbox in place of the manual offered on others – five-speed for the BlueHDi 75 and 100 and six-speed on the PureTech 110 petrol and BlueHDi 130 diesel.

Of all the versions we've driven, the diesel automatic impresses the most. It avoids the rather vague gearshift of the manual cars and pulls more convincingly. The heavier engine also seems to improve the Rifter's ride quality – the diesel is less prone to bobbing up and down on uneven surfaces.

Considering its 'van-with-windows' origins, the Rifter is remarkably comfortable inside. Cruising at motorway speeds is surprisingly quiet, with a roar of wind all that reminds you of just how slab-sided and tall this car is. The ride is comfortable, too – both on motorways and on slower urban roads.

It's also plush enough inside to have you considering a career driving vans. Although the Rifter is better-equipped than its commercial stablemate, the dashboard and interior design are shared between the two and all is comfortable and easy to use. Taking pride of place in the dashboard is Peugeot's i-Cockpit digital instrument panel, and we reckon the Rifter's iteration is the most successful yet – particularly as it seems tailored to suit a high driving position and tall dashboard design, which gives you a clear view over the steering wheel. 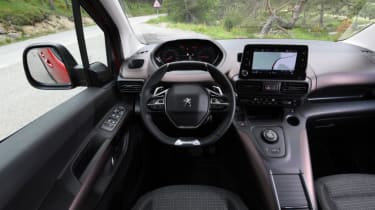 It's also pleasing to see physical controls for the heating and air-conditioning, rather than having to navigate through infotainment sub-menus in order to control the interior climate. The only disappointment is a choice of interior plastics that are clearly designed with commercial use in mind – the shiny, hard materials seem durable, but you won't enjoy touching or looking at them. Still, they might be just the ticket for dealing with the abuse that active family life can bring.

Precise specification has yet to be confirmed for the three Rifter trim levels – Active, Allure and GT Line. We know the latter to be available with an eight-inch touchscreen infotainment system, climate control air-conditioning and attractive 17-inch alloy wheels, but lower-ranking models might do without. Air-conditioning is expected to be standard across the range, though.

The SUV-style garnish that adorns the Rifter's exterior isn't the most convincing, but Peugeot's bulky MPV does actually offer certain features that are beloved of 'Chelsea Tractor' drivers. The high driving position is one and the panoramic view of the road is another. This comes thanks to a big windscreen and narrow pillars, which make it easy to judge the Rifter's width on narrow roads. And, thanks to having a far shorter nose than most SUVs, the front end's easy to keep track of, too. Indeed, even the long-wheelbase version only becomes a challenge when reversing into an awkward space.

It's clear that the Rifter was designed with long periods behind the wheel in mind – there's no shortage of places for drinks bottles – in fact, the door pockets can handle several at any one time. There's also a huge box in the dashboard, which can be cooled in some models and has ample room for a laptop computer, while rear-seat passengers get an airline-style locker that drops down from the ceiling. In total, there's 180 litres of interior storage for odds and ends.

Both lengths of Rifter have five seats in standard form, with an optional third row to bring total capacity to seven. The extra space of the long-wheelbase model is all aft of the third row, so it has little bearing on passenger room. It has a colossal effect on load space, though – in five-seat mode, the standard Rifter has a 775-litre boot, but the long-wheelbase version extends this to a huge 1,050 litres. Drop the second row and a truly van-like 4,000 litres of load volume is unlocked, compared to a still-enormous 3,000 litres for the standard model.

Only a modest level of safety equipment, and Rifter reliability remains to be seen

Peugeot has yet to announce exactly what safety kit will be available on the Rifter. We expect autonomous emergency braking to be either standard or optional – the technology is becoming increasingly commonplace on delivery vans. More sophisticated autonomous driving technology is less likely to be fitted – expect blind-spot monitoring and lane-departure warning systems to be available, but lane-keeping assist seems less likely to feature.

The Rifter's predecessor, the Peugeot Partner, and its near-identical Citroen Berlingo sister, could only manage a three-star rating when tested by independent crash experts Euro NCAP. However, the Rifter, was given a four-star rating in tough 2018 tests. A score of 91% for adult occupant protection is impressive, but it missed out on a five-star result because its performance in the vulnerable road users category was held back by a tall bonnet and stiff windscreen pillars, while the autonomous emergency braking system is unable to detect cyclists. 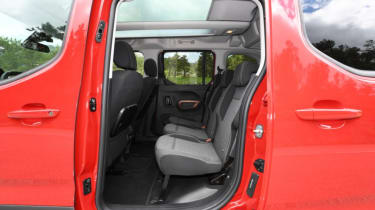 It's similarly tricky to make a judgement on owner satisfaction. Too few Partner TePee owners have participated in our annual Driver Power survey for the Rifter's predecessor to have been scutinised, but results for that car might have been different to the latest model, anyway. Peugeot's performance as a brand, though, leaves a little to be desired – it took 17th place out of 26 brands in the 2018 survey.

However, things are clearly heading in the right direction, as the Peugeot 3008 SUV's overall Driver Power win in 2018 demonstrates – it bested 74 rivals on its way to the title. Lets not forget, either, that the 3008 and Rifter are both spun from PSA group's EMP2 platform.

Until the full price list for UK Rifters has been published, we can't make a judgement on value for money. It seems fair to assume that Peugeot won't want to stray too far from its predecessor's pricing, though, in order to secure repeat custom. On this basis, the Rifter ought to be pretty competitive on costs when compared to its rivals.

Of these, the Citroen Berlingo and Vauxhall Combi Life are the closest – both models are essentially the same aside from cosmetic details. Elsewhere, the Volkswagen Caddy Life is an alternative, albeit a rather costlier one, and the Ford Tourneo Connect is another left-field choice.

Somehow, neither the Ford or the Volkswagen have quite managed to achieve the same family-friendly image as Peugeot and Citroen's 'vans with windows', and the French machines have become something of a default choice among those who want space and practicality, with less emphasis on style or image. With its rugged looks and comfortable interior, though, the Rifter demonstrates that work and play need not be mutually exclusive. 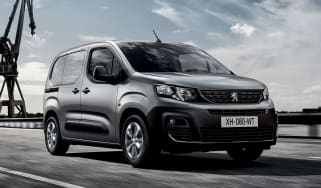