Renault's designers have been on a mission to carve out more space inside the Clio, and it feels more airy and less cluttered as a result. 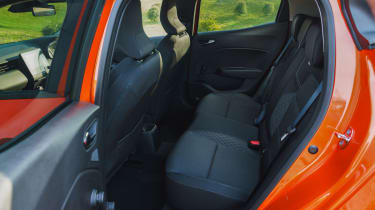 The Clio’s curved roofline doesn't impede too severely on rear headroom but the large C-pillars can make the back slightly claustrophobic. Renault has tried to alleviate this by making the front headrests smaller to boost visibility forwards, and the front seats have been carefully sculpted to boost kneeroom in the back. We found it comfortable up front but still a little tight for adults in the rear. 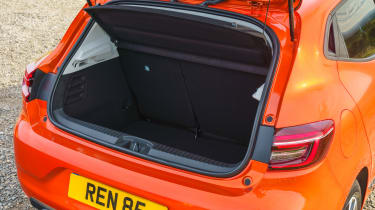 Renault's figures for the boot are 391 litres for petrol versions and 366 litres with the diesel engine fitted - most likely because of the space taken up by an AdBlue tank. That's impressive space for a supermini, beating the Ford Fiesta’s 311 litres and the Volkswagen Polo's 351 litres. Fold the rear seats down and cargo space increases to 1,069 litres. The boot shrinks to 301 litres for the E-Tense hybrid, as a result of the extra hardware required for its complex powertrain, but this is still competitive with most rivals.

A wide boot opening and low floor helps the Clio offer as much luggage volume as it does but this also results in a reasonably large loading lip to carry items over, which could be an annoyance. Renault told us this is necessary to reduce the potential damage if the Clio is hit from behind, helping to keep insurance costs down.