The fifth-generation Clio is based on a new platform, so reliability won't become clear for a few years to come but Renault is in the midfield when it comes to customer satisfaction. Safety is more clear cut, with a five-star rating from Euro NCAP providing lots of reassurance for families. 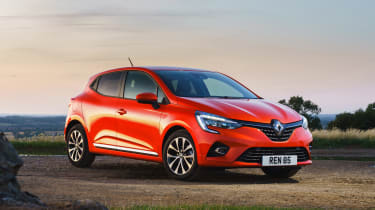 It will only be possible to judge the Clio’s reliability when it’s been on the road for a while. Renault as a brand came 15th out of 30 brands in our 2020 Driver Power owner satisfaction survey, with a strong showing for running costs, affordable servicing and insurance. You also told us its cars were fun to drive but reliability and build quality were less impressive. Overall, 18.7% of owners experienced one or more faults within the first year. The last-generation Clio came 67th out of the top 100 models.

Renault has significantly increased the amount of safety technology fitted in the Clio, giving it lots of big car features. The result was a five-star Euro NCAP score, thanks to standard kit such as autonomous emergency braking (that can detect pedestrians, cyclists and other vehicles) along with lane keeping assist and traffic sign recognition. Standard LED headlights help improve visibility at night and there's also a list of optional equipment including the first 360-degree camera offered in a Renault and Traffic Jam Companion, providing semi-autonomous driving.