The Clio's new underpinnings help future-proof the popular French model and allowed for the introduction of a hybrid model. Launched first, Renault's latest petrol and diesel engines are thrifty enough to attract private and company-car buyers. Don't expect a fully electric Clio to take on the Peugeot e-208 though; Renault is keen for the ZOE to remain its small-EV star. Instead, the E-Tech hybrid is much cheaper to buy than the ZOE and can drive in its EV mode most of the time when you’re in town.

The three-cylinder 1.0-litre TCe 100 is likely to be the most popular engine and it certainly shouldn't break the bank. Even in the sprightly 99bhp model we tested, it was capable of up to 54.3mpg and CO2 emissions of 119g/km when paired with a five-speed manual gearbox. That pips the equivalent Ford Fiesta and should appeal to company-car customers, thanks to a low Benefit-in-Kind (BiK) band. The entry-level SCe 75 engine manages 52.3mpg, but we’d avoid it unless cheap insurance is your main concern, as it's a lot slower.

Despite emitting slightly less CO2 than the petrol engine (109g/km vs 119g/km) the BiK surcharge levied against diesel engines means the 1.5-litre diesel is in a slightly higher BiK band, so it's only likely to appeal to long-distance drivers who can exploit its economy to claw back other running costs. Those that do choose it will enjoy a claimed 67mpg. 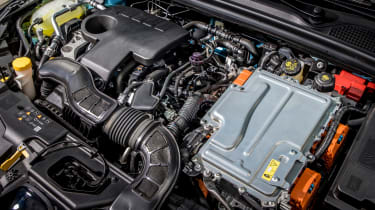 The petrol hybrid Clio E-Tech also offers cheap motoring; its 64.2mpg is a whisker off the diesel and it's far cheaper to buy than all-electric rivals such as the Honda e, Peugeot e-208 and Vauxhall Corsa-e. According to Renault, its 1.2kWh lithium-ion battery and two electric motors should allow up to 80% of urban journeys to be completed with the petrol engine turned off. It also brings a slight VED (road tax) saving, dropping the usual £150 annual fee to £140. Business users will also like its 98g/km CO2 emissions, as the hybrid sits in the lowest BiK band of any Clio.

Both versions with the SCe 75 engine sit within insurance group three, while most others are in group 10, meaning the cost of insurance should be affordable for most drivers. The 128bhp engine attracts a higher group 16 rating, while the insurance groups for the E-Tech hybrid are yet to be announced.

Unlike the model before it, the Renault Clio now comes with a five-year warranty, rivaling Toyota and Hyundai. It is unlimited in the first two years, with a 100,000-mile limit thereafter. This is longer than the three-year warranty that comes standard with a Ford Fiesta, Peugeot 208 or Volkswagen Polo and buyers also get three years of roadside assistance cover.

Renault scored well for servicing costs in our 2020 Driver Power survey, largely thanks to its cheap servicing plans. These are bundled as ‘EasyLife Packs’ that include routine maintenance for a set period and price.