The Ford Focus is, as ever, the most fun car to drive in its class

If you want a hatchback that’s fun to drive, look no further than the Ford Focus. While this third-generation model isn’t quite as sharp as its predecessors, it’s still the best-handling car in its class and all models feel lively in corners. This is thanks to responsive controls, including sharp steering and positive gearboxes, although the latter can sometimes feel a bit notchy. Ford’s Powershift automatic transmission is very impressive, with smooth, fast gearshifts.

As part of the late 2014 facelift, Ford sharpened up the Focus’ steering even further and tweaked the suspension slightly to help improve cornering agility. They’re subtle changes, but they cement the Focus as the car to pick in this class for those who enjoy driving. 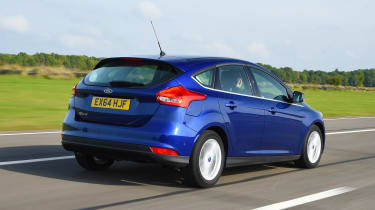 The engine range complements the entertaining handling, with decent performance from every option apart from the sluggish entry-level 1.6-litre petrol with its meagre 83bhp.

Particular highlights include the 123bhp version of the 1.0-litre EcoBoost turbo petrol, which feels powerful and responsive for such a small engine. A 0-62mph time of 11.2 seconds and top speed of 120mph aren’t anything to write home about, but there’s decent mid-range power for overtaking. 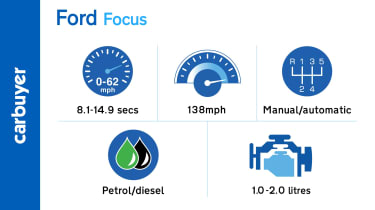 If you’re buying the ST-Line model because you want some of the performance of the ST but without the price tag and running costs, the 1.5-litre EcoBoost is your best bet – the 179bhp version manages 0-62mph in 8.8 seconds. A diesel engine is available, too, but the powerful petrol is our favourite.

In town, the Focus is relatively comfortable, although the larger 17 and 18-inch alloy wheels reduce comfort slightly, transmitting large bumps inside. On the motorway, cars with six-speed gearboxes are quiet and low-revving, while five-speed models less so, but only the entry-level 1.6 and 1.0-litre EcoBoost petrol engines become noticeably noisy.

If you’re tempted by the sporty look of the largest 18-inch alloy wheels, a word of warning: their larger size reduces the amount of steering lock, so parking in tight spaces will be a bit trickier.

All the diesels feel strong and reasonably quick, even the 94bhp version. The 148bhp 2.0-litre TDCi has all the power you could want from a car of this size. It also feels stronger than the equivalent Volkswagen Golf fitted with a 2.0-litre TDI engine, responding more urgently when you put your foot down.