The new Ford Focus boot is small compared to rivals

Responsive controls mean the Focus is easy to park, but visibility could be better. Fortunately, Ford offers optional front and rear parking sensors, as well as a reversing camera. You can also get a self-parking system that takes control of the steering to guide the Focus into a space, leaving you to just work the pedals. This system was upgraded as part of the late 2014 facelift, so it can now park in parking bays as well as parallel spaces. It can even warn you of crossing traffic as you reverse out, too.

The biggest disappointment with the latest Ford Focus is that while its boot is a little on the small side compared to certain rivals. 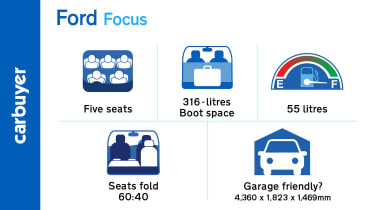 Front-seat occupants have plenty of space in which to stretch out and the driver is in no danger of feeling cramped behind the wheel – it’s adjustable for height and reach and finding a decent driving position is easy. Those in the back don’t have quite such a good deal – particularly in terms of legroom, which is lacking compared to that of a Nissan Pulsar or SEAT Leon.

At least there’s no shortage of places to stow odds and ends on a journey, with decent door bins, a deep armrest cubby and a big glove box, as well as two cup-holders and a 12v power socket.

There are pockets on the back of the front seats and a reasonable amount of space for rear-seat passengers, but small windows mean it feels a little claustrophobic back there, while the middle rear seat is a squeeze for adults. 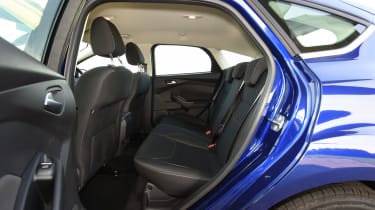 A seats-up capacity of 316 litres is only 17 litres more than you’ll find in the smaller Ford Fiesta and the Focus trails its main rivals, the Volkswagen Golf and Vauxhall Astra, by 64 and 54 litres respectively. Folding the seats increases this to 1,215 litres.

There are some plus points, though. The boot floor is flat, the wheelarches don’t intrude on the space, the 60:40 split-folding back seats lower easily and the tailgate has a wide opening. But the reality is that if you want a practical Focus, the estate model, or the Focus-based Ford C-MAX and Ford Grand C-MAX MPVs are better bets. 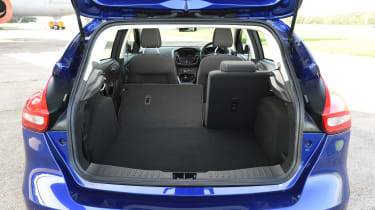 If you want to tow a trailer or caravan, the more powerful 2.0-litre diesel engines are the ones to go for, as they have a towing capacity of 1,500kg. The 1.0-litre EcoBoost can pull 1,200kg in 123bhp form, although it’s sure to feel strained doing so. Note that the Focus ST hot hatchback can’t tow a trailer, as its exhaust exits under the middle of the bumper, leaving nowhere to fit a towbar.