Quality and safety are improving, but the Ford Focus isn't as well built as a Volkswagen Golf

The Ford Focus’ main competitor has always been the Volkswagen Golf, and the Ford has consistently trailed that car for reliability. That still holds true, but Ford has made significant improvements in recent years.

The Ford Focus was rated poorly for reliability in our 2017 Driver Power owner satisfaction survey of cars currently on sale in the UK. Of the owners who responded, 7.7% reported experiencing a problem with their car at least once.

Owners praise the handling and connectivity, but are less impressed with the ride comfort, exterior styling and practicality, marking down the popular hatchback for its ageing interior and poor build quality. 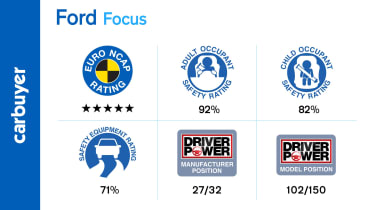 The Focus earned the maximum five-star rating in Euro NCAP crash safety tests, and every model has a full complement of front, side and curtain airbags, lane-departure warning and a driver tiredness monitor as standard. Models from Titanium upwards also have autonomous emergency braking, which can bring the car to a safe halt if it detects an obstacle in its path.