The new Ford Focus has impressive range of engines, with low running costs across the board

The entry-level Focus Style costs around the same as a high-spec Ford Fiesta supermini. Then it's a jump of nearly £3,000 to the Zetec model, with the Titanium and ST-Line versions costing around £1,500 more than that. Top-spec Titanium X adds another £2,000 to the price of the Titanium model. Prices top out at close to £26,000 for the most expensive diesel model with a Powershift automatic gearbox. The Focus Estate costs £1,100 more than the equivalent hatchback.

The Focus is competitively priced compared to rivals, while there are plenty of options available and Ford dealers are open to haggling. The Focus ST is also something of a bargain compared to rival hot hatchbacks. Like the Skoda Octavia vRS, it’s also available as an estate and with a choice of petrol or diesel engines.

This generation of Ford Focus was launched in 2011 and was beginning to lag behind newer rivals like the latest Volkswagen Golf and Peugeot 308 for emissions and fuel economy. However, a late-2014 facelift introduced a range of new engines and technologies that closed the gap. 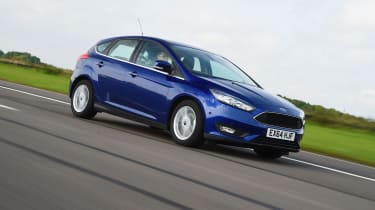 The cleanest engine in the range is the 103bhp 1.5-litre TDCi diesel in ECOnetic models, which boasts fuel economy of 83.1mpg and CO2 emissions of 88g/km. This means correspondingly low Benefit-in-Kind (BiK) company-car tax bills, as it sits in the 18% bracket. There's also a 148bhp 2.0-litre diesel, which returns an also-impressive 70.6mpg and emits just 105g/km of CO2.

The other highlight of the Focus engine range is the 1.0-litre three-cylinder EcoBoost petrol. This award-winning engine is a cleaner alternative to Ford’s standard 1.6-litre petrol. In both its 98 and 123bhp forms, it achieves 58.9mpg, while CO2 emissions are around 110g/km.

There's also an EcoBoost-badged turbocharged 1.5-litre four-cylinder petrol engine. This comes with either 148 or 179bhp, both of which return 50.4mpg and have CO2 emissions of 128g/km. That means low road tax and company-car costs, although we’ve found the respective claimed fuel economy figures hard to match in real-world driving.

Insurance groups are pretty reasonable for the Focus range, the majority of models falling between 11 and 17 depending on engine size and trim level thanks in part to the car’s range of safety features. The automatic city braking system, for example, knocks a couple of groups off the final insurance rating. The sporty ST-Line model falls into group 22, while the entry-level Style has a low group 6 rating.

With a huge number of dealers across the UK, Ford has the largest franchise network of any manufacturer, and if you stick to the service schedule, you’ll be visiting one of them once every year or 12,500 miles.

However, quantity doesn’t equal quality, and Ford’s dealers don’t have the best reputation, with our annual Driver Power owner satisfaction survey finding that owners often complain about a lack of personal service and an inability to find the cause of certain problems.

The Ford Focus comes with one year’s roadside assistance and a three-year/60,000-mile warranty, although you can pay to extend this to four or five years. Ford also offers two or three-year servicing deals, however these offers are expensive when compared to similar deals from rival manufacturers.

Previous models of the Focus weren’t known for strong residual values, and while the current car can’t match the VW Golf or SEAT Leon in this respect, the range average is around 40% – on par with the Skoda Octavia and better than the Hyundai i30 and Peugeot 308.