The VW Golf GTI is cheaper to run than its rivals

The Golf GTI is surprisingly economical for a hot hatchback and much more efficient than some of its closest rivals. Choosing the DSG automatic gearbox doesn't punish fuel economy, either. Overall, when it comes to running costs, the GTI is competitive with rivals.

The 2.0-litre turbocharged petrol engine is rather fuel-efficient considering its 242bhp output. For buyers choosing the now-entry-level Performance model, you can expect to achieve up to 37.7mpg in mixed driving. The limited-edition GTI TCR manages 36.2mpg - not bad considering its extra dollop of power. Performance cars with a DSG automatic gearbox produce up to 143g/km of carbon dioxide, while manual Performance and all TCR cars produce up to 155g/km. This puts it ahead of the 34.9mpg and 176g/km the Hyundai i30 N can manage.

After the first year’s CO2-based road tax (generally included in the on-the-road price), all Volkswagen Golf GTIs cost £145 a year to tax. Be wary of spending too much on options, as pushing the price above £40,000 will make the GTI liable for a surcharge of £320 a year in years two to six, increasing the annual tax bill to £465 during that period. 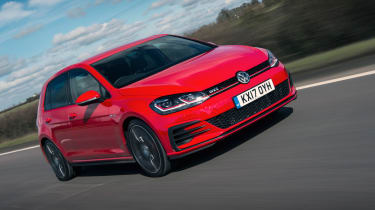 Those fuel economy figures are impressive given that the Golf GTI can do 0-62mph in just 6.4 seconds, or 5.6 in TCR versions. By way of comparison, the Peugeot 308 GTI has a slightly quicker six-second 0-62mph time and returns 37.8mpg while emitting 148g/km of CO2, but the Skoda Octavia vRS eclipses the Golf with 38.2mpg and 142g/km CO2 emissions.

If you want similar performance to the GTI, but need lower running costs, the Golf GTD might be a better option. It’s not quite as much fun as the petrol GTI, but its CO2 emissions can be as low as 116g/km and it has a fuel economy figure of 52.3mpg.

Hot hatchbacks are rarely cheap to insure and that doesn’t change with the Golf, which falls into insurance group 33 for the Performance version.

Volkswagen’s standard warranty is a three-year/60,000-mile affair, like many other manufacturers. You can do better though: the Kia Ceed, for example, comes with a far more generous seven years of cover.

If you choose one of VW’s fixed-price schemes, servicing shouldn’t break the bank. The plans include annual services, a brake fluid top-up after three years and regular vehicle health checks.

More in-depth servicing plans can include things like oil changes, replacement spark plugs and replacement tyres. Your Volkswagen dealer will be happy to discuss the best plan for you.