The Volkswagen Golf has improved passenger and boot space, so the latest model can hold plenty of stuff in either three or five-door form

The Volkswagen Golf is a spacious family hatchback, with more rear legroom than the previous model and a decent-sized boot. The back seats split and fold, and the boot features a 12V plug, luggage hooks and a low load lip. In the cabin, the Golf gets plenty of clever storage spaces including a cubby under the front armrest, a glovebox that’s cooled by the car's air-conditioning and numerous cup-holders.

Passengers are unlikely to find life aboard the Golf an unhappy experience. It’s fairly spacious, with room in the back for three adults, although whoever’s sitting in the middle may find the large transmission tunnel eats into the room for their feet. The Skoda Octavia has the edge here. 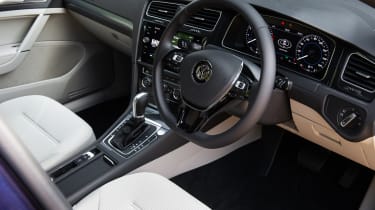 Storage for odds and ends is plentiful in the VW, with a large cooled glovebox, a cubby under the centre armrest between the driver and front-seat passenger and another in the roof console. There are also two cup-holders up front, while all but the S models benefited from a lidded cubby between the front seats.

On top of this, there are large door pockets in all the doors, lined with felt to stop their contents from rattling around. And the pockets at the front have massive drinks holders that can take even the biggest two-litre bottles.

Lift the tailgate and you'll find the latest VW Golf hatchback has the edge over its Ford Focus rival in terms of boot size. The five-door’s 380-litre capacity increases to a maximum of 1,270 litres when you fold the rear seats, while the five-door Ford has to make do with figures of 318 and 1,101 litres respectively.

Other models in this class have clearly been benchmarked against the Golf: the Hyundai i30 and Kia Ceed offer 378 and 380 litres respectively with the rear seats in place, although they have the edge in terms of maximum boot space. 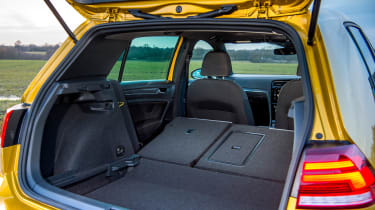 The Golf is trumped for ultimate capacity by its Skoda Octavia sister car, which makes the most of its dimensions to offer a massive 590-litre space, increasing to 1,580 litres with the seats down.

But while the VW can’t match this, it still stands out thanks to some clever touches. When you fold the back seats, the rear seatbelts are held in place by neat ridges, plus there’s a ski hatch built into the seats. Also, the step between the boot floor and folded seatback has been smoothed out to make it easier to slide awkward items in. The false boot floor can even be lifted up and clipped into place to remove the step completely.

Not surprisingly, diesel versions of the Golf make the best tow cars in the range, with the 148bhp and 181bhp 2.0-litre TDI engines in the GT and GTD respectively offering a decent maximum towing capacity of 1,800kg.