"There’s no doubt that the Volvo V60 Cross Country has a certain niche appeal, but there are cheaper and more practical rivals" 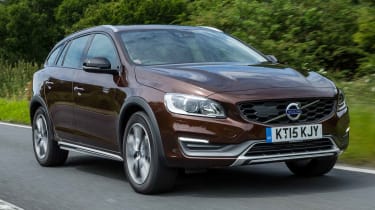 The Volvo V60 Cross Country goes up against rivals like the Audi A4 Allroad, the Volkswagen Passat Alltrack and the BMW 3 Series Touring in four-wheel-drive xDrive form. You could also choose it instead of smaller, cheaper rivals like the SEAT Leon X-perience or Skoda Octavia Scout, although these lose some of the Volvo’s upmarket allure. If you go for the V60 Cross Country, there's a choice of just two trim levels – SE Nav and SE Lux – both of which come reasonably well equipped. 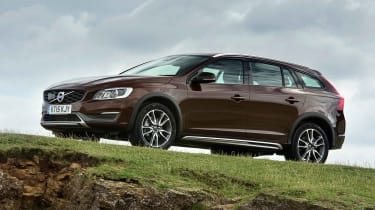 There are three engines to choose from – two 2.0-litre four-cylinder diesels, which come with 148 and 187bhp respectively – and a turbocharged 2.4-litre five-cylinder diesel, which also manages 187bhp. Both are front-wheel drive as standard, although the more powerful version can be had with four-wheel drive and an automatic gearbox, which does make it more costly to run.

Both trims come with a host of standard safety kit and although Euro NCAP hasn’t specifically crash-tested the V60 Cross Country, the standard V60 achieved a full five-star rating.

The entry-level 148bhp D3 Cross Country has CO2 emissions of 111g/km and will return 67.3mpg. This results in a Benefit-in-Kind (BiK) company-car tax rating of 22%. These figures are exactly the same as the 187bhp D4 four-cylinder diesel, but add an automatic gearbox (to either) and these numbers change to 120g/km of CO2, 61.4mpg and a 24% BiK rating.

Go for the five-cylinder D5 – which gets a six-speed automatic gearbox and four-wheel drive – and CO2 emissions are 149g/km, which means BiK rating of 29% for company-car users.

All the engines are strong performers, but the V60 Cross Country isn’t great to drive

The range-topping D4 four-wheel-drive version with the 2.4-litre five-cylinder diesel will cost the most to run, but it’s a pretty strong performer. Its power is spread over a wider section of the rev range than either of the four-cylinder diesels and it'll do 0-62mph in 8.9 seconds. In contrast, the least powerful D3 will do the same sprint in 9.1 seconds. However, the lighter, two-wheel-drive D4 version is quicker, doing it in just 7.8 seconds.

Under normal driving conditions, the D4 AWD is front-wheel-drive only, but if those start to lose grip, the four-wheel-drive system shifts power rearwards to help the car regain traction. Not only does this help you keep going when the road gets slippery, but it also means you can tackle a little light off-roading, too.

Another advantage of the raised ride height is comfortable ride quality. The Cross Country isn’t, however, a car suited to being driven quickly; the steering is slightly too light and a little vague, while the brake pedal doesn’t give a huge amount of feedback, either, making it tricky to slow down or stop smoothly.

There’s no doubt the V60 Cross Country has comfortable seats, but the interior looks and feels dated

We’ve been rather spoilt by Volvo interiors recently; the latest Volvo XC90, S90 and V90 all boast stylish and minimalist interiors. With that in mind, the mess of buttons, switches and poor-quality screens that you’ll find in the V60 Cross Country are a bit of a disappointment. The centre console is just about indecipherable, while the central infotainment screen is very difficult to navigate and the graphics aren’t exactly futuristic, either. That being said, it does all feel well built, and the quality of the majority of the materials is high.

One thing where Volvo has always excelled – and still does – is the quality and comfort of its seats. Thankfully, the Volvo V60 Cross Country is no exception. It’s a very comfortable car to travel in, with great support and loads of adjustment to make sure everything is perfectly set up.

Rivals are significantly more practical than the V60 Cross Country

When most of us think of Volvo estates, we're likely to think of the ultimate in practical cars – a box on wheels, basically – that prioritises load-carrying. Not so the V60 Cross Country. With just 430 litres of boot space with the rear seats up and 1,241 with them down, it’s way behind rivals like the Volkswagen Passat Alltrak and Audi A4 Allroad quattro, as well as smaller and cheaper alternatives. These include the Skoda Octavia Scout and SEAT Leon X-perience. The small space is largely due to the car's swooping roofline, which also limits rear headroom.

There is, however, plenty of storage inside, with a big glovebox, large door bins and plenty of cubbies dotted around. There are also cup-holders between the front seats and a handy tray behind the ‘floating’ centre console for storing change or other loose items. If you frequently tow, then both the D3 and D4 versions of the Cross Country can haul a maximum of 1,800kg; the five-cylinder D4 AWD version ups this to 1,900kg.

One common perception of Volvo that hasn’t changed is a dedication to safety. The V60 Cross Country gets plenty of safety kit which helped it to a maximum five-star safety rating from Euro NCAP. This includes the obvious things like tyre-pressure monitoring, stability control, a variety of airbags, two ISOFIX child-seat points in the back and anti-lock brakes, as well as extras like the company’s City Safety system. This will stop the car automatically at low speeds if it senses a potential collision.

Unfortunately, things are less rosy when it comes to reliability. Even though the V60 finished in a credible overall 63rd place (out of 150) in our 2016 Driver Power owner satisfaction survey, it came 127th for reliability. Meanwhile, the Volvo brand itself came an, again decent, 13th out of 32 manufacturers, but was let down by a 22nd-place finish for reliability.

The V60 Cross Country is well equipped, but you do pay for it

It’s worth remembering that the V60 Cross Country starts at more than £31,000 and rises to over £38,000 depending on which model you buy. That sort of pricing puts it among some seriously strong competition and while you do get a decent amount of equipment, you can get cars with more space, more modern interiors and more desirable badges for this sort of money.

You can also specify a variety of options and option packs. The Winter Pack – which adds heated front seats, a heated windscreen and heated washer nozzles – is great for frosty mornings. Meanwhile the Driver Support Pack is expensive, but adds an absolute tonne of extra safety kit on top of the Cross Country’s already impressive standard list.