“The Volvo V60 is a more stylish estate than traditional boxy Volvos, but nearly a decade on, it’s starting to show its age”

Volvo has long been associated with angular estate cars devoid of curves or drama, but the Volvo V60 sacrifices some practicality to buck that trend. It was an altogether more stylish model for Volvo when it first launched in 2010 and was updated several times since then to help keep it fresh.

Volvo needed to boost the V60’s styling to compete with popular executive cars such as the BMW 3 Series Touring and Mercedes C-Class Estate, a job it largely managed, even if it remained a reasonably niche choice. Fast-forward almost 10 years, and a new BMW, Mercedes and Audi A4 have all been released, leaving the current V60 looking a little dated.The V60 can’t compete with the driving dynamics of the 3 Series Touring either.

The V60 is likely to win people over on account of its unique looks, solid build quality, relaxing interior and the fact it’s an unusual choice. They probably won’t be put off by its less sporty drive, but may find the V60’s less up-to-date technology more of a stumbling block.

A fairly broad engine range is encouraging, with one petrol and three diesel models joined by two diesel plug-in hybrids with low emissions but high price tags. With a T4 badge on the boot, the one petrol available is a turbocharged 2.0-litre with 187bhp, which can return a reasonable 48.7mpg. 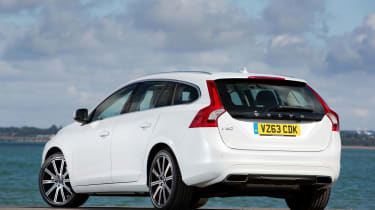 Diesel versions also get a 2.0-litre engine, but D2, D3 and D4 badges denote their power level and fuel-economy. The D2 kicks off the range with just 118bhp, but manages up to 72.4mpg and emissions of just 104g/km - making it popular with company-car drivers. It’s slow for the class though, taking 11.5 seconds to get from 0-62mph.

The D3 and D4 models have economy from 65.7 to 70.6mpg and only emit between 104 and 116g/km of CO2, but come with 148 and 187bhp respectively, getting from 0-62mph in more respectable times of 9.1 or 7.7 seconds. Oddly, it’s the powerful D4 with a manual gearbox that achieves the best economy figures. Plentiful performance with affordable running costs makes the D3 our pick, unless you’re happy to pay the extra for the D4, in which case you probably should.

All versions of the V60 are happiest on the motorway, where they’re refined and comfortable, because faced with a twisting road, the Volvo’s suspension and steering don’t really involve the driver. There’s plenty of grip and it always feels safe, but the body lean and heavy steering don’t entertain like the beautifully balanced BMW 3 Series Touring.

That's unless you go for the Volvo V60 Polestar, with more than 250 tweaks to improve performance, including heavily revised suspension and brakes. These features, along with carbon fibre spoilers and extensive testing at the Nurburgring, should ensure plenty of excitement.

The V60 has a well designed interior featuring a ‘floating’ centre console – which is thin enough to hide a storage cubby hidden behind it – and some attractive materials, but it’s a generation behind new models like the bigger Volvo V90 . Perhaps the biggest surprise, however, is that the V60 doesn’t feel that practical. The low roofline means headroom for rear passengers is limited and the boot isn’t all that large, either. The rear seats fold flat into the floor, which helps make use of the available space, while a low loading lip makes loading heavy items easier.

Trim levels include the Business Edition, Business Edition Lux, SE Nav, SE Lux Nav, R-Design Nav and R-Design Lux Nav, all with features like climate control, DAB radio and a seven-inch infotainment screen with sat nav. For 2017, Volvo added the Business Edition Lux trim, after revealing almost a third of customers opted for the entry-level specification. The Lux pack adds leather-faced upholstery, a reversing camera, an information display in the instrument cluster, unique 17-inch alloy wheels and gloss-black trim inserts. Further up the range, the V60’s character is more luxurious in SE Nav trim and sportier if you choose an R-Design model, while the V60 Cross Country (reviewed separately) has raised ground clearance and plastic body cladding to make it capable off the beaten track. A range of Polestar performance add-ons is available, too, including larger alloy wheels, engine tuning upgrades and chassis enhancements.

Reliability shouldn’t be too much of a concern, with the V60 coming a reasonable 63rd out of 150 models in our 2016 Driver Power customer satisfaction survey, while the Volvo brand came a respectable seventh out of 27 manufacturers, putting it just ahead of BMW. Safety is impressive, with the V60 being awarded five stars in Euro NCAP crash-testing, with a rare 100% score in the safety assistance category.