The Volvo V60’s ageing design means it has artificially heavy steering and overly firm suspension, yet it still leans more in corners than a BMW 3 Series Touring and can’t match the BMW’s fun driving experience. It’s safe, though, with plenty of grip and predictable handling that makes the car easy to control at all times.

If you’re faced with a long motorway journey, few cars at this price point can better the Volvo. At a cruise, barely any noise makes its way inside and the car’s seats are some of the most comfortable in the business. They seem to match the contours of your back perfectly, although they don’t offer the lateral support of those in sportier versions of the BMW 3 Series during enthusiastic cornering.

With 187bhp, the V60 D4 diesel produces 26bhp more than the 2.0-litre engine in the BMW 320d EfficientDynamics Touring. Performance is also better in the Volvo, with the D4 posting a 0-62mph time of just 7.7 seconds – half a second quicker than the BMW.

This engine is the sweet spot in the range. It’s faster and not much less economical than the D2, (which gets from 0-62mph in 11.5 seconds) but for day-to-day driving, the extra power of the D4 makes it easier to live with than the D2.

Volvo’s eight-speed automatic gearbox (costing around £1,500 on the D4) makes a huge difference. It changes gears more smoothly and quickly than the old Powershift automatic and for an extra £150 you can have steering-wheel-mounted gearshift paddles. 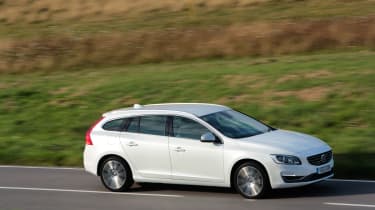 Petrol engines in the V60 are limited to the 187bhp T4 and 362bhp Polestar. With higher running costs than a diesel-engined V60 and 0-62mph taking 7.3 seconds, the T4 mainly makes sense if you cover few miles or do mainly short journeys.

The Polestar is quick – it covers 0-62mph in just 4.8 seconds – and its four-wheel-drive system gives extra grip, while the smooth eight-speed automatic gearbox is responsive. You can tweak the Polestar's suspension settings, so you can have it stiffer if you like, plus it corners very well and feels quite agile. For the 2018 model year, Polestar is producing 1,500 vehicles split between the S60 (which we don't get in the UK) and V60, with updated features. Spoilers crafted from carbon fibre increase downforce by up to 30%, improving grip and high-speed stability. New diamond cut alloy wheels are also fitted to give it more distinctive looks.

At nearly double the price of the D4, the D6 plug-in hybrid is very hard to recommend. However, its Congestion Charge exemption could be appealing to Londoners and it’s quick for a hybrid – 0-62mph takes just six seconds. The D5 plug-in hybrid is a better bet, costing less to buy, but still feeling quick enough with its 0-62mph time of 6.9 seconds.