Subaru has gone for an all-petrol engine range, including a hybrid variant 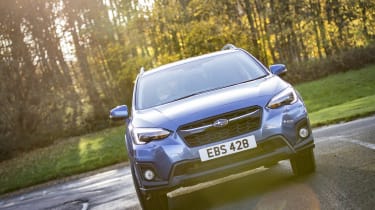 Unlike the first Subaru XV, the second-generation model is an all-petrol affair with a choice of conventional 1.6-litre or 2.0-litre petrol engines and a range-topping e-Boxer model featuring a mild-hybrid powertrain. All three variants get the same Lineartronic continuously variable transmission (CVT) that’s designed to keep the engine at optimum revs while you drive for improved fuel-efficiency. Unlike most rivals, every XV has four-wheel drive as standard.

The entry-level 1.6-litre engine is somewhat underpowered for the weight of the XV and returns a WLTP fuel economy figure of 35.3mpg. It also has the highest CO2 emissions of the range, emitting 157g/km.

The 2.0-litre engine has been heavily reworked, with Subaru claiming 80% of its components were redesigned for better power and economy. It claims official economy of 40.9mpg under the old NEDC testing, with emissions of 155g/km of CO2 placing this version of the XV into the higher Benefit-in-Kind (BiK) bandings for company-car drivers. In real-world driving, you can expect fuel economy of around 32-33mpg.

The mild-hybrid e-Boxer model does a little better thanks to its petrol-electric powertrain, and can travel at up to 25mph using only the electric motor. With the electric motor assisting the 2.0-litre petrol engine, it offers slightly improved economy of 35.7mpg and CO2 emissions of 149g/km. 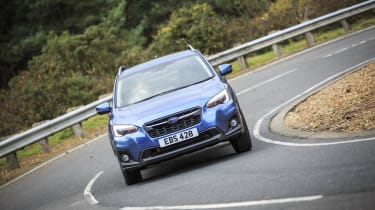 Both the Peugeot 3008 and Nissan Qashqai can better the XV, producing 48.7mpg when fitted with a 1.6-litre petrol, but they have front-wheel drive, making them less capable off-road. The Skoda Kodiaq can return 47.1mpg with a less powerful setup, but this drops to 39.8mpg with 148bhp and four-wheel drive.

After the first year's CO2-based road tax (generally included in the on-the-road price), all Subaru XVs cost £145 a year to tax.

Insurance groups for the XV start at 10 for the base 1.6-litre model in both SE and SE Premium trim levels. The 2.0-litre petrol variants sit in groups 15-16, with the e-Boxer mild-hybrid yet to be confirmed. 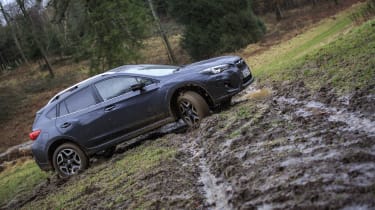 Subaru’s five-year/100,000-mile warranty should offer plenty of reassurance and is longer than you get as standard with a Nissan, Peugeot or Skoda. The Hyundai Tucson matches the cover, while only the Kia Sportage comes with a standard seven-year warranty.

Subaru dealerships aren’t as common as those of bigger brands, so it’s worth checking where your local retailer is located. A lack of fixed-price servicing plans also means prices can vary a bit more than with some other models, so it’s important to discuss expected maintenance costs with the dealer before going ahead.