Should you buy all-season tyres and which of the available are the best? 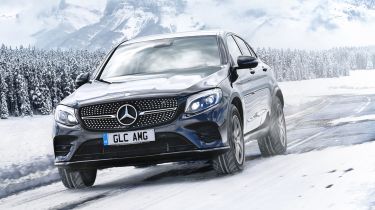 We can’t overstate the importance of good tyres, as they’re the only contact patches between you and the road. Many cars are fitted with summer tyres but they don’t perform at their best when the temperature drops and roads get slippery. You could buy a dedicated set of winter tyres but these can be expensive and storing and changing the tyres to suit the season can be inconvenient.

Another option is to replace your tyres with all-season tyres. These are specifically designed to work in most of the conditions and temperatures you’re ever likely to experience on the road, and give you peace of mind that your tyres can cope with any weather, however extreme. Their grip patterns and rubber compounds are designed to disperse water and provide grip both on the road surface and snow.

Tyre tread depth - what you need to know

When we last ran this test in 2017, the Michelin CrossClimate tyres came out on top. Michelin doesn’t actually call them all-season tyres but recommends leaving them on all year. They offered better wet and dry performance than some of the other tyres we tested, which tended to act like winter tyres and provided better grip in the snow. As our weather is only extreme occasionally, these Michelins were the best choice for the UK.

But are these tyres better than dedicated summer and winter tyres? Read on to find out. 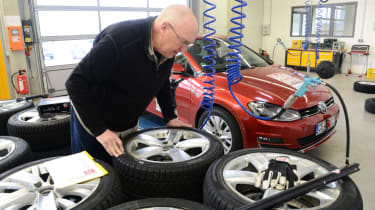 We tested these tyres in snowy, wet and dry conditions, and checked the rolling resistance and noise of each product. The tyres on test were all the same size (225/45 R17), a common size for family cars. While that may not match your car’s wheels, different-sized tyres from the same manufacturer will perform the same. Wherever possible, the tests were performed by staff at our sister site, Auto Express. All prices are from Black Circles, and were correct at the time of writing.

Good all-season tyres will deal with more than a little bit of slush, and our tests included braking, cornering and accelerating in the snow.

To see how our tyres coped in wet weather, we subjected them to similar tests. We also set up a scenario where tyres might aquaplane (if there’s too much water on the road, tyres can completely lose grip), to test how likely they were to lose grip. As with the snow tests and dry weather tests, we repeated each test multiple times to get an average result.

Cabin noise might not be the first thing you consider when buying a tyre but you’ll soon notice noisy ones and it could become quite annoying. To test the amount of noise you’d hear inside, we coasted down from 50mph on concrete paving, and two different tarmac surfaces. We repeated the process twice on each surface to get an average score.

Rolling resistance is the amount of force resisting the motion of travel, and it affects your car’s fuel economy. Cheaper tyres might be tempting, but you might find that you’re paying slightly more at the pumps because they have a higher rolling resistance.

We tested six of the top tyres brands - Goodyear, Continental, Michelin, Falken, Nokian and Tristar - with Goodyear and Nokian previously appearing in our 2016 test. Continental’s first all-season makes the grade, alongside Michelin’s previous winner. Tristar is a good budget option if you can’t stretch to the prices of the other products. We’ve compared these to our favourite winter and summer tyres, which are both Continental products.

The tyres all had a 94 weight rating, and speed ratings of either V or W (150mph or 168mph) for a fair comparison. Read our guide to tyre labelling for more information about the letters and numbers on your tyres, and what they mean.

How to spot a slow puncture 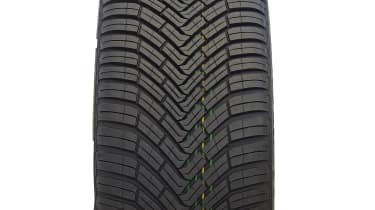 Continental’s all-season tyre is very impressive, and performed well in all the tests we carried out. It came first or second in 11 of the 13 test categories, and even its fifth place in the noise test was very close to the winner’s result. The Continental All Season Contact was the best tyre on test on snow, and was very good on wet and dry surfaces too. For this year, this all-season tyre is the best available. 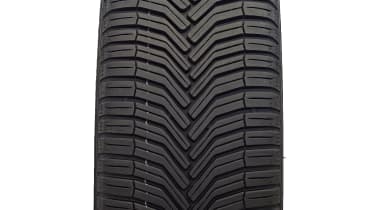 Michelin describes the Cross Climate+ as a ‘summer tyre with winter capability’, and that was reflected in our tests. It was the best in the dry, and best at braking in wet weather, but wasn’t quite so good in the snow compared with other tyres. However, it’s still impressive, and performed much better than a normal summer tyre would. It’s a popular tyre and its sizes allow it to fit wheels up to 20 inches, plus it’s not too expensive. 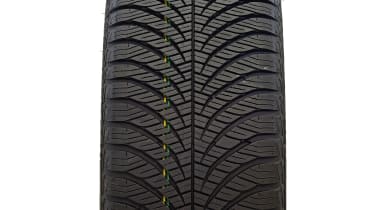 Whereas the Michelin excelled in some areas but fell down slightly in the snow, the Goodyear was consistently good throughout our tests. It was among the best in the wet, and it didn’t aquaplane as easily as its rivals. While it couldn’t quite match the Continental’s braking performance in any of the surfaces we tested, and rolling resistance was slightly higher than we’d like, it made up for that by being the quietest tyre. If refinement and keeping unwanted noises out of the cabin are important, this is the tyre to pick. 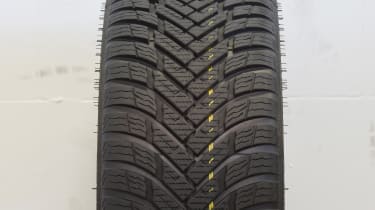 In the test we ran a few years ago, the Nokian Weatherproof performed the best in all the snow tests but it only came top in the snow braking test this time, and came bottom in the other snow test categories. It looks like newer competitors have it beaten but it does perform well in wet weather. The Nokian is also the best for rolling resistance which, combined with the lower price, makes it great value because it’ll be the most economical tyre. Plus, its wet-weather performance makes it a top choice if it rains regularly where you live. 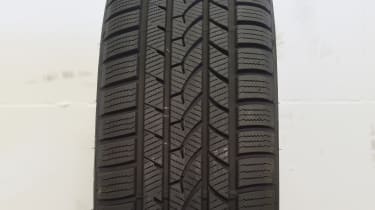 Snow traction and handling is the Falken’s forte - it came second in these areas - but it was disappointing elsewhere and didn’t manage a single first-place rating in any of our tests. While it’s branded as an all-season tyre, it was slightly off the pace in all of our wet and dry tests. Cabin noise was impressive (it came joint second, and not far off the lead tyre) but it was the worst for rolling resistance. Its low price might tempt some buyers but you won’t be saving money at the filling station. Some customers have also complained of higher-than-expected tyre wear. 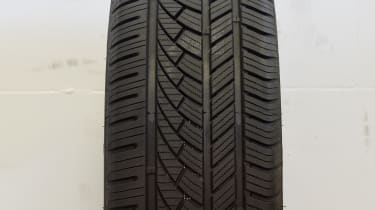 The Tristar’s budget price shows that you get what you pay for when it comes to all-season tyres. It was okay at braking in snowy and dry conditions, and the amount of cabin noise was good, but elsewhere it struggled. Its wet performance was not just disappointing but alarming - it finished last in four of the five wet tests, and it needed more than 10 metres more than the Michelin to stop in wet weather. That’s a huge difference, and we were generally worried by the amount of grip it had in the wet. Because of this, we can’t recommend the Tristar; it’s much better to spend a little extra on better tyres, especially when the gulf in all-weather performance was so drastic.

For more information about tyres, read our guides to part-worn tyres and run-flat tyres.