"The Vauxhall Ampera offers it all: a long enough electric-only range for the vast majority of daily journeys combined with the ability to cover long distances, too."

The world is changing and the number of electric, hybrid and range-extending cars available in the UK is growing every year. The Vauxhall Ampera is one of the best so far – so good, in fact, that we named it our best hybrid or electric car of the year in 2013.

It has rivals in all shapes and sizes due to its unique layout – from hybrids like the Toyota Prius to all-electric models like the Nissan Leaf. The closest rival would be the BMW i3 Range Extender, which has similar running gear to the Ampera.

The Ampera’s design is sleek and futuristic, hinting at the advanced technology underneath, so you and others know exactly what you’re driving.

This car emits less CO2 than any conventional hybrid or efficient diesel models on the market, so it's exempt from paying road tax and the London Congestion Charge. You can plug it straight into the mains to charge the battery (which takes just shy of four hours) and then drive using only the electric motor for up to 50 miles. So routine daily trips in this car shouldn’t use any petrol at all.

If you want to go further, a petrol generator takes over to charge the batteries, resulting in potential fuel economy of over 200mpg and CO2 emissions of just 27g/km. And on top of these green credentials, the Vauxhall Ampera delivers strong performance. However, it isn’t as quick as the lighter BMW i3.

Inside, the Ampera is treated to a very high-quality cabin, with two screens and touch-sensitive buttons across the whole dashboard. The two large monitors control most of the functions; one is in the usual spot and displays the sat-nav and infotainment systems, while the other is located behind the steering wheel, notifying you of how much charge is left and what your current fuel economy figure is.

The Ampera comes in just two specifications, Positiv and Electron, but both models are generously equipped. It’s definitely worth a look for green-car buyers, thanks to its lack of range anxiety, but it’s awfully pricey, even after the £5,000 government grant for electric vehicles. Its low running costs will come into play for high-mileage and company-car drivers, but there are cheaper options if all you do is city driving or short trips. 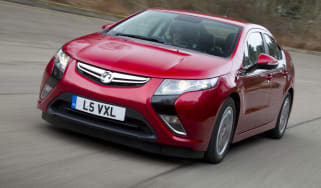 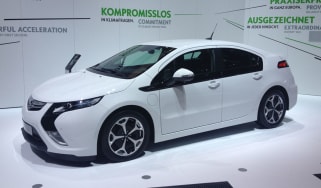 The price of the Vauxhall Ampera plug-in hybrid has dropped by £3,500
Escape the new London Congestion Charge 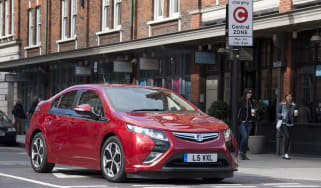