There’s plenty of room for passengers, but the Volvo XC60 boot isn’t huge

Despite a lower stance and curvier lines compared to its predecessor, the latest XC60 still has plenty of space for five occupants to relax in comfort. Unlike many Volvos of old, the XC60 doesn’t have the biggest boot in its class, but most families should find it sufficient.

Compared to its XC90 big brother, the XC60 is only 9mm narrower, but it loses 118mm of height and most significantly, it’s 261mm shorter. Despite this, there’s still good shoulder, knee and headroom in both the front and rear seats and five people can fit in the XC60. Like most mid-size SUVs though, it’s actually most comfortable with four people inside, because the middle squab is quite hard and narrow, with less room for your feet. 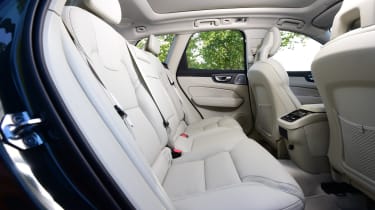 The only other potential concern is the rear-seat access for parents with child seats, because the rear door opening is on the narrow side. Of course, being so much shorter means there’s no room for a third row of seats. If you want to carry seven, you’ll need to upgrade to the XC90 or look at alternatives like the Land Rover Discovery Sport instead.

While Volvo used to be famous for its box-on-wheels estate cars, the XC60 has a far more stylish and premium design. This does come at the cost of boot space though, which measures 505 litres to the window line, 635 litres to the roof and expands to 1,432 litres if you fold down the rear seats. Some rivals offer handles in the boot to do this, but the XC60 does not. However, if you have the optional air suspension fitted, you can lower the rear of the car from a button inside the boot to make loading easier. 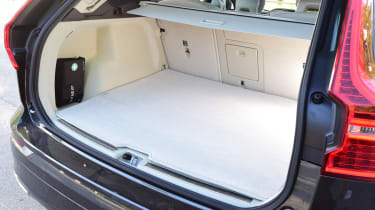 Space behind the rear seats just manages to beat the Porsche Macan and Lexus NX, but both the Audi Q5 and BMW X3 have 550 litres and the longer Jaguar F-Pace has 650 litres. A powered tailgate is fitted as standard.

The XC60 D4, B4 and B5 (D), B5 (P), and B6 (P) can all tow a braked trailer of between 2,300 and 2,400kg, which should provide owners with plenty of scope for towing large trailers, caravans or even a horsebox. The plug-in hybrid T6 and T8 Recharge models have an upper limit of 2,100kg but this is still more than most cars, estates and crossovers.