While diesel engines used to be something of a default choice for the majority of SUV customers, modern hybrid options – such as the Recharge T6 and T8 setups offered with the Volvo XC60 – mean there's now more choice. Volvo has also added mild-hybrid technology to petrol and diesel versions of the XC60, cutting running costs without significantly increasing the cost or weight.

Turbocharged petrol B5 and B6 models are unlikely to appeal to anyone who takes longer trips, returning just over 30mpg to 38.1mpg. The high CO2 emissions of 168-213g/km across the line-up won’t appeal to business buyers either.

Both the T6 and T8 Recharge plug-in hybrid models are intriguing propositions; low emissions drop BiK liability to a compelling level for company-car drivers, while claimed fuel economy rises to 100.9-113mpg, with an all-electric range of around 28 to 32 miles. You might find it difficult to achieve those figures unless you drive carefully and ensure the battery is charged on a regular basis. Both Recharge models are also considerably more expensive to buy than the regular petrol and diesel models.

If you choose an XC60 that comes in at less than £40,000, you’ll only face an annual road-tax bill of £150. However, stray above that figure with optional extras or the more expensive engines and the annual cost will increase to £475 for the first five times you renew your tax. The T6 and T8 plug-in hybrid cost £140 a year to tax, but both are far more expensive to buy than the conventional petrol and diesel models. 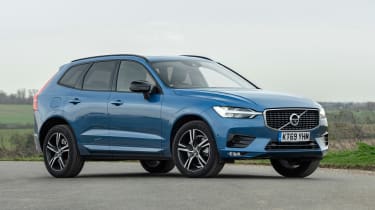 Insurance groups for the XC60 start in group 31 for the D4 diesel engine in Momentum trim, running to group 36 for the R-Design Pro and Inscription Pro trims with either the B5 petrol or diesel engine. The plug-in hybrid T6 and T8 Recharge models sit in groups 41 and 42 respectively. This places the XC60 slightly above a 2.0-litre diesel Jaguar F-Pace (groups 27 to 33), but should make it cheaper to insure than the Porsche Macan in top groups 45-50.

Volvo offers monthly fixed price service plans to help spread the cost of routine maintenance over the first few years of ownership, so you won’t get stung by bills come service time. At many of its retailers, signing up to this also includes free roadside assistance as an added perk.

Volvo offers a standard three-year/60,000-mile warranty with the XC60, which can be extended at an additional cost. This is a fairly typical warranty, but is starting to look a bit stingy when some rivals including BMW cover an unlimited mileage in the first three years.