It’s no rocket ship, but the Volvo XC60 should have plenty of punch for families

Volvo has moved to a new streamlined vehicle architecture that only uses 2.0-litre engines, and while they aren’t class-leading in terms of performance, they’re likely to satisfy families and business users alike. With a good blend of economy and a reasonable turn of speed, most will find any XC60 a fine all-rounder, particularly seeing as it’s equipped with four-wheel drive (except for the D4) and an automatic gearbox as standard.

The XC60 suffers in direct comparisons with the Jaguar F-Pace and Porsche Macan – it can’t come close to providing a driving experience to compare with those two far sportier SUVs. It’s a closer match for the Audi Q5 and Lexus NX, with plenty of grip from its big, wide tyres, and just enough sensation through the steering wheel for it to still feel agile.

An optional adjustable suspension system reduces the XC60’s ride height when ‘dynamic mode’ is selected and this has some effect on curbing the body lean that affects most versions when cornering hard. But even the lowered, stiffened suspension of R-Design models can’t inject much passion into the way the Volvo drives.

R-Design cars also have larger wheels, which has a negative impact on the car's ability to glide over bumps. If you're set on an R-Design, it's worth considering the adaptive suspension, which irons out some of those rough edges. Although the R-Design looks the part, we reckon the Momentum and Inscription models are better all-rounders. You’re far better off leaving the suspension in comfort mode and enjoying the effortless way bumps and motorway imperfections are dealt with. 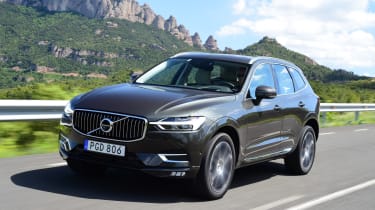 In place of the discontinued 187bhp D4 engine, buyers can opt for the mild-hybrid B4 diesel, which has 194bhp and manages 0-62mph in 8.3 seconds in both front- and four-wheel drive forms.

The most powerful diesel offer is the 232bhp B5 (D), which offers considerably more pace with four-wheel drive as standard. This version reaches 62mph from rest in 7.1 seconds, matching the Jaguar F-Pace, and features innovative technology that uses a whoosh of compressed air to get the turbo working faster when you press the accelerator.

Volvo previously offered a manual gearbox in the diesel XC60, but the eight-speed automatic suits the nature of the car better and now comes as standard across all models. For the most part, it offers smooth changes – especially as you gradually accelerate. It’s not the quickest to respond to a sudden press of the throttle though, or to downshifts if you manually nudge the gearlever, and sometimes it can hang in gears as you slow to a stop.

It’s worth noting that Volvo’s performance arm Polestar offers ‘optimisation’ kits for all diesel, petrol and hybrid XC60 engines. These provide a modest increase in power, but also recalibrate the shift points of the automatic gearbox. The aim is to provide a more responsive drive without sacrificing fuel economy – and the modification is fully covered by Volvo’s warranty.

The B5 model comes with a 2.0-litre turbocharged petrol engine producing 247bhp – enough to allow the XC60 to accelerate 0-62mph in 7.0 seconds in front-wheel drive form, with the four-wheel drive model taking 6.9 seconds. The appeal of the B5 though, lies in its quiet nature, particularly at low speeds. However, although it isn’t as noisy as the diesel, it can’t match that engine’s pulling power.

At the top of the conventional petrol engine range, the B6 uses the same turbocharged 2.0-litre engine, with an increased power output of 296bhp. It’s capable of 0-62mph in 6.2 seconds, but this isn’t an engine that responds particularly well to enthusiastic driving. The automatic gearbox doesn’t like to be hurried, either – you don’t get the instant changes of a Porsche Macan or Jaguar F-Pace.

Introduced for 2020, the T6 Recharge is the entry-level XC60 plug-in hybrid. It’s 2.0-litre petrol engine and electric motor combine to produce 335bhp, giving it the ability to sprint from 0-62mph in 5.9 seconds. When using battery power, it promises silent electric running for a distance of up to 32 miles.

The T8 Recharge plug-in hybrid is the fastest XC60, with its petrol and electric engines producing a combined total of 401bhp and reaching 62mph from rest in just 5.5 seconds. If you want some extra oomph, the Polestar package ups total power to 415bhp. Almost ironically, the extra power makes this the most relaxing of all XC60s to drive, with plenty of overtaking urge available on demand. Plus, there’s the silence promised by up to 28 miles’ electric running.