The Jaguar F-Pace is practical as well as stylish

Despite its appealingly rakish exterior, the Jaguar F-Pace is remarkably accommodating inside and truly can deliver on the ‘utility’ element of ‘SUV’. Some of its attractive interior appointments, though, might not stand up well to the rough-and-tumble of family motoring.

Getting into an F-Pace is easy thanks to its raised ride height and wide-opening doors. Once inside, front-seat occupants have plenty of room to stretch out in the comfortable seats, while only the tallest rear passengers will feel hemmed in. The optional panoramic sunroof does eat into headroom a little, but the sense of airiness it brings means it’s a worthwhile extra, especially if you mainly carry children in the back. Interior storage is reasonable: the door bins and glovebox are a good size and shape, but the storage box between the front seats is a little small. 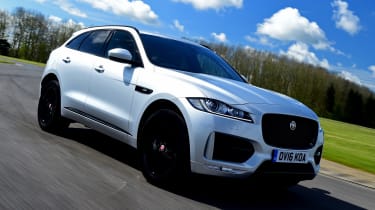 The F-Pace has a bigger boot than the Porsche Macan and BMW X4 and its 650-litre capacity actually matches cars from the class above, like the BMW X5. This load-carrying ability is all the more impressive, as the F-Pace looks sleek and stylish despite its vast boot.

The 40:20:40 split-folding rear seats are easy to drop (even more so with the optional remote release levers fitted to the boot) and, when lowered, increase the F-Pace’s load area to 1,740 litres. The boot opening is large and well shaped, although while the metal plate at its base looks good, this is prone to getting scratched unless you’re careful. 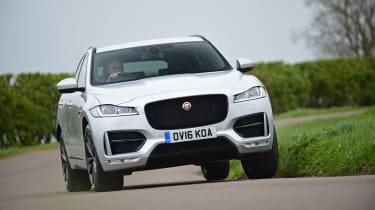 When fitted with a manual gearbox the F-Pace can tow up to 1,600kg. Choosing the eight-speed automatic gearbox sees this figure rise to 2,400kg.