"The Kia ProCeed drives more like a family car than a hot hatchback despite its stylish design, and big boot means it’s surprisingly practical too" 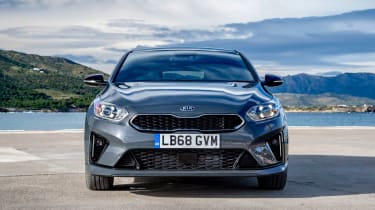 It's all change for the Kia ProCeed and not just because the Korean brand has dropped the annoying apostrophe and underscore from its name. No, the changes are so complete that Kia could have been forgiven for coming up with a new model name entirely. The ProCeed has transformed from a three-door hatchback into a five door ‘shooting brake’ - the designer’s term for a cross between an estate car and a coupe.

The result is the range-topping model in the Ceed line-up. It’s actually longer than the Sportswagon estate, with almost as much boot space, but there’s a sharper focus on design and driver enjoyment. This makes it rather unique in its class, albeit with styling inspired by cars like the Mercedes CLA Shooting Brake and even the Porsche Panamera Sport Turismo, despite the latter costing many times more than the Kia. 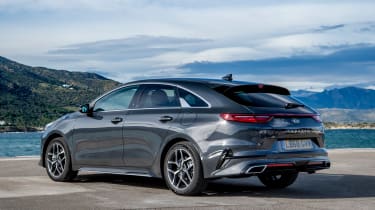 It's a response to the decline in popularity of three-door cars and one which creates a desirable model that's better suited to families. Or at least, so Kia hopes. One of the biggest differences is the rear windscreen, which is very steeply raked for a more sporty appearance. Despite this, there's still an estate-car-rivalling 593 litres of boot space, dwarfing the standard Ceed.

There's good news in the front, too, because build quality and the materials used to upholster the interior look and feel good. It's a shame there are a few too many buttons but the main snag is in the back, where the stylish exterior means passengers over six feet tall will struggle to get comfortable, despite the back seats being lowered to help make up for the lower roof. It's a good job a rear-view camera and parking sensors are fitted as standard because rear visibility is rather like looking down the wrong end of a telescope.

The engine line-up is pretty straightforward, with a petrol and diesel making up the bulk of expected sales, and a more potent petrol GT model for keen drivers willing to spend a bit extra. Both the 1.4-litre T-GDi petrol and 1.6-litre CRDi diesel are shared with the rest of the Ceed family and produce just under 140bhp. Performance is best described as 'adequate' and the petrol manages around 45mpg, with the diesel getting 10mpg extra but also costing more to buy. With 201bhp, the GT is ‘warm’ without troubling ‘hot’ hatchbacks, but gets from 0-62mph in a brisk 7.2 seconds and returns 39mpg.

Engineers have also beefed up the chassis somewhat, lowering the ProCeed by 5mm and tuning its suspension for a more agile feel, while trying to retain the comfort of the standard Ceed.

Fitted with the 1.4-litre T-GDi petrol engine, the Kia ProCeed can return up to 45.6mpg when fitted with a manual gearbox, or 44.8mpg with a seven-speed DCT automatic. CO2 emissions of 132 and 130g/km also mean there's little in it for running costs, with both sharing the same 27% Benefit-in-Kind (BiK) band. 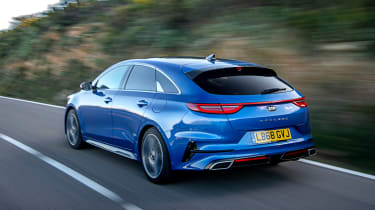 It's a similar story for the 1.6 CRDi diesel, with the manual slightly ahead with 56.5mpg (54.3mpg for the automatic) and emissions of 110-111g/km resulting in a 27% BiK band once the diesel surcharge is taken into consideration.

The high-performance ProCeed GT will be more costly to run, with a larger and more highly tuned 1.6-litre T-GDi engine returning 39.3mpg and emissions of 142g/km.

The Kia ProCeed is a competent performer, but it fails to live up to its looks

The 1.6-litre diesel is familiar to other Kia models and sounds pleasantly smooth, even compared with the 1.4-litre T-GDi, which is slightly coarse by petrol standards. Sadly performance doesn't match the exterior looks, with 0-62mph taking around 10 seconds. It's best when driven at a more relaxed pace, when we were able to get close to Kia's claimed fuel-efficiency. 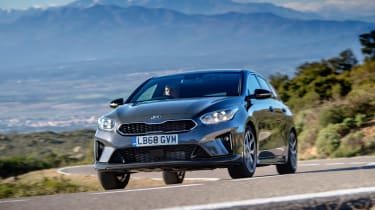 There's room for improvement in the gearbox department too. The manual has a vague throw and there's little feel through the clutch pedal, so not only does it feel less sporting, it can be hard to pull away smoothly. The automatic isn't the magical solution either, with slow shifts in automatic and manual modes.

Kia has made the ProCeed's suspension slightly lower and firmer than the hatchback and Sportswagon, giving it a fraction more composure when tackling a tricky section of road. The steering is light and telegraphs precious little information, but it's accurate.

The interior is undoubtedly well-appointed

In its efforts to make the ProCeed more exciting, Kia has kept its ride comfort intact. There's a small amount of pitter-patter at low speeds, but otherwise it's smooth and relaxed.

There are three trims to consider: GT-Line, GT-Line S and the performance GT model. Designed as an upmarket choice in the Ceed line-up, even the 'entry-level' GT-Line isn't really a budget choice, with an eight-inch touchscreen, sat nav, a rear-view camera, DAB radio and rear parking sensors. 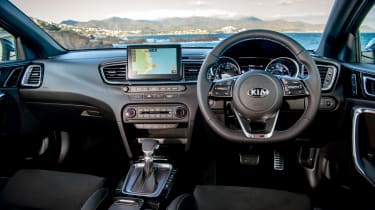 In the transition from a three-door hatch to a five-door shooting brake, the Kia ProCeed has certainly become more practical. In fact, its boot is half as big again as the standard Kia Ceed, measuring 594 litres. That's not far off the Sportswagon estate, largely because of the more steeply raked rear windscreen. GT and GT-Line versions feature a 60:40 split and fold rear bench, while GT-Line S models get a 40:20:40 configuration with a lever in the boot to fold them remotely. 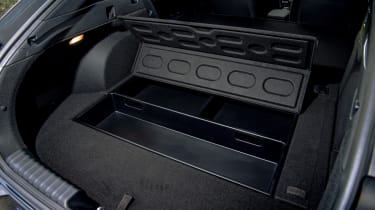 There are plenty of handy features to make life more convenient too, including a powered tailgate that can open automatically, a low loading lip for heavy luggage and a hidden underfloor storage area.

Based on new underpinnings, the Kia Proceed hasn't been out for long enough to fairly judge its reliability, but a long warranty is reassuring. There's a comprehensive level of safety kit too. 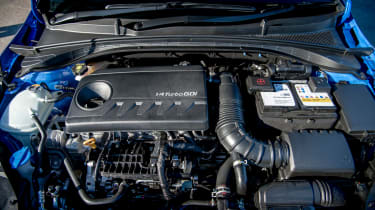 Kia owners are generally a happy bunch, with the brand coming third out of 30 manufacturers in our 2019 Driver Power satisfaction survey. Of all those who sent their feedback, 11.4% experienced a fault of some sort with their Kia in the first year. If something does go wrong, it should be addressed by the seven-year/100,000-mile warranty.

The ProCeed hasn't been crash-tested by Euro NCAP but the Kia Ceed hatchback on which it’s based scored four stars. Choosing the optional safety pack bumps it up to a full five-star rating. It's fitted with a long list of active and passive safety technology, including lane keeping assist, autonomous emergency braking and driver attention warnings.

The price you see is what you'll pay, with few hidden options

The ProCeed is only available in the top trim levels in the Ceed family, so starts from around £24,000 for a 1.4-litre petrol in GT-Line trim. That's around £500 more than a Ford Focus Estate 1.5-litre EcoBoost, so you'll be paying a slight premium for the ProCeed's exotic looks. 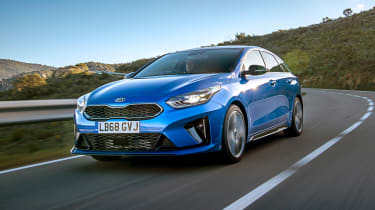 At least you won't have to add much kit because, in typical Kia fashion, it's best to simply choose the trim level that best suits your needs. Unlike the Mercedes CLA Shooting Brake, there's no huge list of optional extras. Indeed, in GT-Line S guise, the ProCeed has almost everything you could ask for. You will need to fork out £550 for any colour other than the standard Silver Frost, though.