Rivals may be better to drive, but the Evoque is an excellent long-distance cruiser 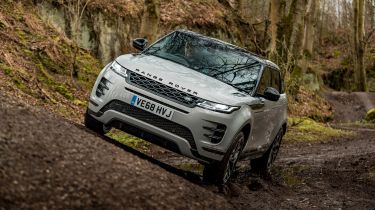 The Evoque shares its underpinnings with the Jaguar E-Pace but the two aren’t the same to drive. As Jaguar is the JLR group’s sporty brand, the E-Pace is the better choice for keen drivers as it’s sharper, firmer and more involving to drive. With the new Evoque, Land Rover has focused on comfort and refinement to avoid being too similar to the E-Pace, which does make it a distinguished cruiser.

Overall, it feels more grown-up than the previous generation. The steering is precise enough and there's ample grip, but also a noticeable amount of body roll in faster corners. The whole car feels happier at a relaxed pace, and driving fast down a twisty road will confuse the nine-speed automatic gearbox. Although a sporty Evoque would be missing the point slightly, it's not as good to drive as a BMW X1 and it does feel like Land Rover’s engineers could have made the Evoque better to drive if they weren’t concerned about it treading on the toes of the E-Pace.

Off-road, however, the Evoque is better than ever. Despite the fact that most will never venture off the road, the new model can wade through water up to 600mm deep (100mm more than the last car) and features Land Rover’s Terrain Response 2 selectable driving modes. You can choose from four modes: Comfort, Sand, Grass-Gravel-Snow and Mud & Ruts. The Evoque will leave lesser SUVs far behind when the going gets tough.

The Evoque offers a 2.0-litre diesel engine with three power outputs - 148bhp, 178bhp and 237bhp, badged as D150, D180 and D240. The entry-level D150 is available with either a manual or automatic gearbox, but the former is only offered with front-wheel-drive. Automatic versions of the D150 come with four-wheel drive. The manual D150 manages 0-60mph in 9.9 seconds and the automatic does it in 10.4 seconds. We’d avoid the D150 if you can afford to, as it feels underpowered.

The D180 and D240 take care of the 0-60mph sprint in 8.8 and 7.2 seconds respectively, which is better for a luxury small SUV. These versions are very smooth and whisper quiet, even at motorway speeds. The mild-hybrid technology hides some of the diesel’s harshness above 2,500 rpm, keeping the cabin mostly peaceful, along with lots of soundproofing materials.

We've tested the D180 and D240, with the latter offering a hefty 500Nm of torque. With this engine, the Evoque is never short of power, and it takes care of overtaking and towing duties with ease. The D180 offers more than adequate performance, but is slightly let down by an automatic gearbox that struggles to decide which gear to select. It's fairly smooth, though, sitting between the Audi DSG and the smooth BMW eight-speed.

Despite the pressure on diesel cars, Land Rover still expects 80% of Evoque sales to feature a diesel engine.

However, when we tested this engine in the Land Rover Discovery Sport, we found that it needed revving higher to make rapid progress impacting the fuel consumption further still.

Most of the Evoque variants feature mild-hybrid tech that allows the engine to switch off at speeds of 11mph or lower while maintaining power for the car’s electrics.

The P300e plug-in hybrid combines a 1.5-litre turbocharged petrol engine, an electric motor mounted to the rear axle and a 15kWh battery hidden away under the rear seats. When the petrol engine and motor work in unison, the total power output is 304bhp, with power distributed by an eight-speed automatic gearbox to all four-wheels. This powertrain makes the PHEV model the fastest accelerating Evoque you can buy, managing 0-60mph in 6.1 seconds.

Equally impressive is that when using electric power only, the P300e can reach speeds of up to 84mph. From a standing start the car emits a synthetic whooshing noise to warn nearby pedestrians but any drone from the electric motor itself is minimal thanks to its location on the rear axle and the car’s sound insulation. It’s comfortably powerful enough to get you moving around town as well, with a useful meter in the digital instrument cluster keeping you updated as to how much battery charge you have remaining. 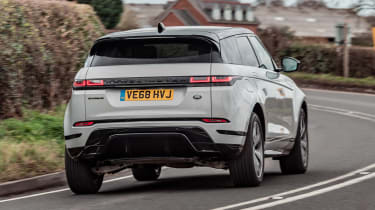 The switchable driving modes are straightforward to use, and are operated via a switch mounted on the centre console. Selecting hybrid mode combines both electric and petrol power, with EV allowing the car to run on battery power for as long as possible. The third, ‘Save’ mode, allows you to reserve the battery power for a particular part of a journey, but this does have an impact on fuel economy. During our test, we found that using Hybrid mode was most efficient, with the P300e capable of completing most short journeys using battery power alone.

Once the battery is depleted the engine automatically switches on, with the transition to petrol power smooth and barely noticeable. This helps make the Evoque 300e very refined on the move, far more so than PHEV rivals such as the Volvo XC40 Recharge T5.

When you do require the petrol engine, its three-cylinder thrum only makes itself known at higher revs. The eight-speed automatic gearbox is well-matched to the PHEV powertrain, with smooth gear changes at all speeds. Despite the battery and electric motor increasing the car’s weight to two tonnes, it’s sure-footed when cornering. Body control is good and there’s a refined ride quality that hides minor road imperfections very well.