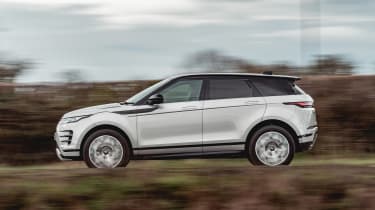 The latest Range Rover Evoque benefits from clever 48V mild-hybrid technology, meaning the engine can completely shut down when coasting at 11mph or under. This is fitted as standard to all but the entry-level front-wheel drive variant. This helps the Evoque’s fuel economy, and even the top engine manages a respectable figure.

For the first time, the Evoque is available as a plug-in hybrid after the P300e joined the line-up in late 2020. According to JLR, the PHEV is capable of up to 34 miles of range in electric mode and can return triple-digit economy figures when its petrol engine and electric motor work in tandem.

As it’s the ‘baby’ model in the Range Rover line-up, the Evoque is among the most efficient and promises some of the lowest running costs.

The Evoque we tested was a higher spec model in the range costing over the £40,000 threshold. This means you’ll have to pay an extra £325 per year in tax until the car is six years old, whereas models under £40,000 will only attract the standard rate of £150 per year.

The plug-in hybrid Evoque costs more than £40,000, meaning you’ll be liable for road tax of £140 a year, and an additional £325 surcharge from the second year of ownership until year six.

The Range Rover Evoque offers its 2.0-litre diesel engine with three power outputs, but all manage over 40mpg on the WLTP combined cycle. The entry-level D150 with a manual gearbox officially manages 44.9mpg. While testing it, we achieved just over 45mpg from the top all-wheel-drive D240 automatic model, which is impressive for a car with 237bhp on offer. Some Evoque models offer slightly better fuel economy than the BMW X3 and Mercedes GLC Coupe, but the difference is so small that you’d struggle to notice it in the real world.

Pick one of the three petrol engines, however, and you’ll be stopping to fill up far more often. Regardless of whether you choose the P200, P250 or P300 version, you’ll only see around 30mpg on the WLTP combined cycle. Again, this is similar to its petrol powered rivals.

Depending on model, alloy wheel size and performance, the conventional petrol and diesel versions of the Evoque emit between 165g/km and 221g/km of CO2, placing them in the top bandings for Benefit-In-Kind (BiK) company-car tax.

The P300e plug-in hybrid is the most efficient model, with a claimed electric range of around 34 miles and fuel economy of up to 141mpg. A low CO2 emissions figure of 44g/km places towards the bottom of the BiK bandings, making it an attractive proposition for company-car drivers.

To help maximise the range of the PHEV model, its 15kWh battery can be charged from 0-80% via a 7kW wallbox charger in under 90 minutes. When connected to a public fast charger, replenishing the battery to the same level takes around 30 minutes.

Choose a Range Rover Evoque in S trim with a 148bhp diesel engine and it will sit in group 27 out of 50. Meanwhile, an R-Dynamic D180 automatic is two groups higher and a powerful D240 in the same trim sits in group 35. This is the same group as an R-Dynamic HSE P300 petrol.

It should cost slightly less to insure that the rival BMW X4, which occupies groups 32 - 45, with the rival Mercedes GLC Coupe possibly attracting similar insurance premium again as it sits between groups 29 - 34.

As with all Land Rover models, the Evoque comes with a three-year, unlimited mileage warranty as standard. You can opt for an extended warranty that will cover the vehicle for ten years or 100,000 miles but, considering many buyers drive a new car on a shorter finance deal and don’t keep it for a decade, it’s unlikely many owners will choose this warranty. 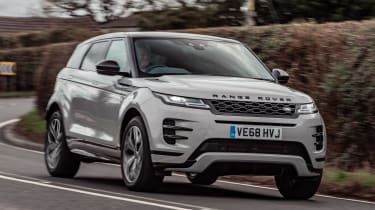 The paintwork will also be covered for three years, along with a six-year anti-corrosion guarantee.

When it comes to servicing a Range Rover Evoque, you can expect it to be quite expensive. For a benchmark, the previous Evoque costs £330 for an interim service and £440 for a full service at a Land Rover dealership, so this is something to bear in mind if you are looking to buy one.