The Mercedes GLC is actually quite economical given its size

The Mercedes GLC is pretty economical for an SUV, with its claimed figures rivalling the likes of the Audi Q5 and BMW X3. Mercedes also offers competitive warranty and servicing plans.

The 220d version of the 2.0-litre diesel engine can return up to 47.9mpg, reducing slightly in top trims with optional wheels fitted. CO2 emissions also change markedly, with the GLC 220d Sport emitting 156g/km for a higher BiK band, increasing to 167g/km with the AMG Line trim level. The more powerful GLC 300d is a shade less economical, at up to 42.8mpg, while emissions starting at 176g/km put it firmly in the top BiK band. By comparison, the BMW X3 xDrive30d offers more pace and similar efficiency figures.

Petrol engines are offered too. A GLC 300 model promises up to 34.5mpg, while the AMG 43 and 63 models above are even thirstier. They certainly prioritise speed over running costs; you can expect 27 and 21mpg respectively. All petrols are in the top BiK band. 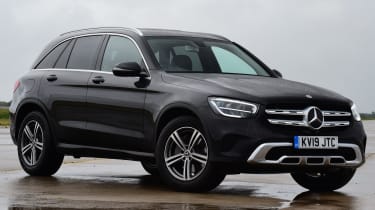 A plug-in hybrid GLC 300 de version is now available, pairing the 2.0-litre diesel engine with a 13.5kWh battery. It offers 27 miles of electric range and up to 140mpg if you regularly recharge the battery, while business users will be drawn to its 12-13% BiK rate. It’s also exempt from the London Congestion Charge until October 2021.

After the first year's CO2-based road tax (generally included in the on-the-road price), all Mercedes GLCs cost £150 a year to tax. Every GLC now has a list price (including options) of more than £40,000, making it liable for an additional surcharge of £325 a year in years two to six, bringing the annual bill to £475 during that period.

Insurance groups for the facelifted Mercedes GLC haven't been announced yet, but diesel versions of the earlier GLC fell into groups 32 to 41, which is about the norm for the class.

Mercedes provides a three-year/unlimited-mileage warranty on all of its new models, which is the same as BMW offers on the X3. Pan-European Mercedes Roadside Assistance is also included, that can last up to 30 years if you keep the car maintained within the dealership network.

Mercedes offers fixed-price servicing plans that cover all scheduled maintenance. You can pay all in one go up front or spread the cost over monthly instalments, which should be about £35 for a diesel GLC.