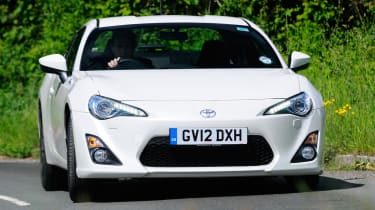 The second instalment of CarBuyer’s third birthday celebrations rounds up our most popular video content – and features cars from Hyundai and VW as well as Mercedes and Ferrari.

Mat and Rebecca have spent hours at the wheel (and in the back seats) to provide you with all you need to know about near enough every new car on sale in the UK. So take a look at our top 10, and flick through some of our most popular videos from the past three years.

The Toyota GT 86 – or Scion FR-S as it is badged in some markets – has been our most popular video to date by a considerable margin. Almost 1 million of you have watched Mat’s review of the sporty Toyota since June 2012, racking up 3,332 likes and more than 1,500 comments. We love it, too, crowning it ‘best coupe’ in the CarBuyer 2013 awards.

The Hyundai i30 is another of our favourites, and won our prestigious CarBuyer Car of the Year award in 2012. Nearly 750,000 people have watched our i30 review so far – enjoying Mat’s demonstration of snowboard-carrying practicality, rear seat space and fizzy drink glove box storage. With over 1,600 likes and almost 700 comments, it’s sparked quite a discussion, too.

We tried something totally new for our review of the new Mercedes A-Class, showing you every nook, cranny and feature in this mammoth nine-minute video. But don’t let the lengthy run-time put you off. Mat still covers all the usual bootspace, passenger space and driving opinions, but with a little help from our Facebook audience…

Arguably the biggest rival to the Mercedes A-Class is the BMW 1 Series – and with 679,372 views to date, it’s less than 60,000 plays behind the stylish Merc. Mat reviewed the updated BMW in September 2011 and was impressive with the improvements over the old model. Two years later, does the same stand true? Take a look, and let us know if you agree.

The Mercedes S-Class has always been one of the most technologically advanced cars on the road, and even though there’s now a new model on sale – the old car has still racked up more than 670,000 views in less than two years. Proving its popularity, more than 150,000 of you have watched Mat’s review of the new car in a little over a month!

It appears you lot love Mercs – with the Mercedes CLS taking the third spot in CarBuyer’s top 10. The sleek CLS slots in at sixth – impressing with its blend of speed, refinement and running costs – not to mention its head-turning looks and high-quality interior. Mat gave it the CarBuyer once-over back in 2011, and since then more than 650,000 of you have watched, liked and commented on it.

A surprise addition to the CarBuyer portfolio – and a celebration of CarBuyer’s second birthday – Mat gave the Ferrari FF the CarBuyer treatment. He subjected it to all the usual rigors, from rear seat practicality, through to bootspace and comfort – regardless of the fact that it costs more than £200,000. Take a look at what Mat thought, and leave your comments in the space below.

Like the Mercedes S-Class, a newer, far superior model has actually replaced the Audi A3 Sportback featured here – but that hasn’t stopped it racking up almost 600,000 video views over the past three years. It was one of CarBuyer’s first videos – and clearly one of its best!

Perhaps surprisingly, the VW Scirocco is the only Volkswagen to crack CarBuyer’s top 10 most viewed video reviews. The stylish coupe is based on the VW Golf, but surpasses its practical sibling in terms of desirability and driver enjoyment. Nearly 1,000 of you have liked Mat’s video review since it went live just before Christmas 2010, totting up more than 560,000 plays.

The Range Rover Evoque is the brand’s baby SUV – but that hasn’t limited its practicality in the two years since it went on sale. Nor has it stopped you lot watching it over and over – with a whopping 554,000 plays since July 2011. In fact, it knocked the Mercedes C-Class out of the top 10 just before we published this – beating it by just 800 views.

Stay tuned this week for more popular content, including reviews, tips and advice and best buys!