Prices for the new Volkswagen Passat start at £22,215 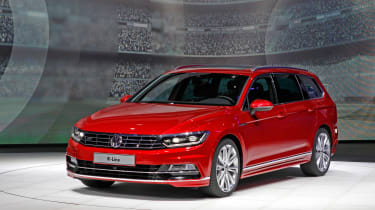 Volkswagen has taken the wraps off the new Volkswagen Passat at the Paris Motor Show. The company showed the standard car as an estate in classy R-Line trim, plus saloon and estate versions of the super-efficient Passat GTE petrol-electric hybrid.

The new model is lower and wider than the car it replaces and has a stylish, coupe-like profile. We know that the most basic new Passat, a 1.6-litre turbodiesel with a manual gearbox in S trim, will cost £22,215.

By giving the car an imposing grille and classier overall look, VW is going after upmarket rivals such as the BMW 3 Series and Mercedes C-Class. The new Passat is also set to feature plenty of new technology to help it compete with the established premium cars in its class. 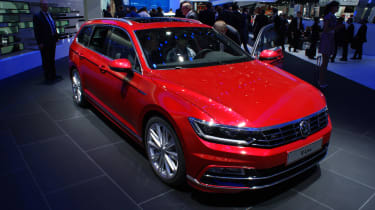 The new Volkswagen Passat is based on some of the same components as the Volkswagen Golf to save money on development costs. These modern parts shave 85kg from the weight of the Passat, to improve fuel economy and make it more fun to drive.

The front grille of the car incorporates the latest VW grille seen on other new models, such as the most recent Volkswagen Golf and Volkswagen Polo, while the rear of the car quite clearly takes inspiration from the luxurious Volkswagen Phaeton.

The premium feel of the new car continues inside, where the interior has been designed to challenge the upmarket BMW 3 Series, Audi A4 and Mercedes C-Class.

The revised Passat is 2mm shorter than the current car, but passenger space increases by 33mm thanks to a longer wheelbase (the space between the front and rear wheels). Headroom has also increased and boot space is up by 21 litres to 586 litres.

The car will be available in five trim levels; S will be the most basic, then there's SE, SE Business, GT and finally R-Line. 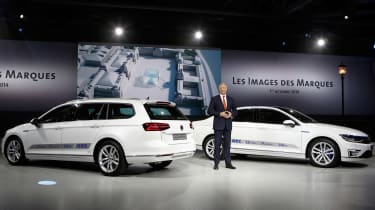 One of the most important additions to the new Passat range is a powerful twin-turbo diesel engine. The 2.0-litre TDI BiTurbo produces 237bhp – 62bhp more than the current most powerful diesel. This engine will power the top-of-the-range model and will only be available with Volkswagen's 4MOTION four-wheel-drive system and a DSG automatic gearbox. Despite the car's power, VW claims it can still achieve 53mpg fuel economy.

A BlueMotion model capable of 78mpg and CO2 emissions of 95g/km will join the range in summer of next year.

From October 2015, the new VW Passat will also be available as a hybrid, using the same engine as the VW Golf GTE petrol-electric plug-in hybrid. This produces 208bhp in total and can cover up to 31 miles using electric power alone. If you have a short commute, you could conceivably travel to and from work without ever using any fuel. In the Golf, the hybrid engine can return 188mpg and emits 35g/km of CO2 (meaning free road tax and London Congestion Charge exemption) and the Passat should be capable of similar figures.

Lots of new equipment will be available in the new Passat, including powerful LED headlights. They'll be capable of remaining on full beam without dazzling oncoming traffic by turning off individual bulbs.

Safety is a priority as the car chases the all-important five-star Euro NCAP rating. That means it has plenty of cutting-edge technology available, including autonomous braking that prevents low-speed collisions (a five-star Euro NCAP requirement from 2015), emergency assistance that stops the car if it detects the driver has fallen asleep and trailer assistance that makes it easier to reverse park when the car is hooked up to a trailer.

From late 2015, Passat buyers will be able to order the car with Active Info Display, a 12.3-inch TFT screen that will replace the traditional instrument dials. A head-up display (HUD) will also be added to the options list. This projects information such as speed and sat-nav directions onto the windscreen in front of the driver. 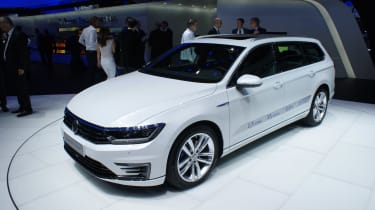 The new Volkswagen Passat was shown in public at the Paris Motor Show and the car will be available to order in the UK from 7 October. Prices for saloon models are listed below, with equivalent estates costing around £1,500 more. First deliveries will be made in January 2015.

From launch, the car will be available in saloon and estate bodies, but those models will be joined by a VW Passat Alltrack version with raised suspension, as well as a sleek five-door VW Passat CC coupe.

For all the latest on the VW range, visit the Carbuyer Volkswagen reviews page.