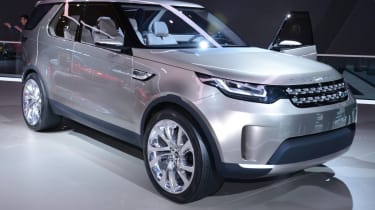 The New York International Auto Show runs from today until the 27 April at the Jacob K. Javits Convention Centre on Manhattan. A range of concept cars and new production models will be seen in the metal for the first time - read on for more info on all the most important cars on display at the show.

Those in the market for a premium convertible sports car will be interested to know that the BMW M4 convertible made its first public appearance in New York. The car has a 423bhp 3.0-litre petrol engine and can do 0-62mph in just 4.4 seconds, making it faster than the BMW M3 Convertible that it replaces, which is pretty impressive when you consider the M4 is also more efficient. The car is due in the UK in September and will start at £60,730.

BMW will also use the show in New York to show off the new BMW X4. The car was revealed in March but BMW didn’t want to detract from the launch of the BMW 2 Series Active Tourer and the BMW 4 Series Gran Coupe at the Geneva Motor Show so decided against putting the X4 on its stand there.

The BMW X4 looks like a smaller version of the popular BMW X6, with its SUV stance and sloping coupe roofline, and buyers will have choice of three diesel engines. The car is expected to arrive in the UK in July and cost £36,590.

Land Rover has unveiled the Discovery Vision Concept, a car that previews three new models set for launch over the next few years. The first will be a replacement for the Land Rover Freelander 2, the second a new Land Rover Discovery, with the third expected to be a small SUV.

The concept car is much less boxy than the existing Discovery and has plenty of cutting-edge technology, including an ‘invisible’ bonnet, gesture control for the lights, doors and gear shifter, and leather that Land Rover says has been developed to be totally water and oil repellant.

To celebrate 25 years of making the Mazda MX-5 sports car, the Japanese manufacturer has unveiled a commemorative special edition, which is on display at the motor show New York.

The car is based on a normal Mazda MX-5 Roadster Coupe but gets a glossy black roof, exclusive ‘Soul Red’ metallic paint for the bodywork, off-white leather upholstery and dark grey 17-inch alloy wheels.

The special edition uses the same 158bhp 2.0-litre petrol engine as the current Roadster Coupe but gets an upgraded suspension for even better handling.

MINI’s crossover has been given an overhaul to bring it up to date with the new MINI hatchback, and the car is on show in the Big Apple.

The Countryman has been given some exterior styling updates, including a redesigned nose, LED running lights and new alloy wheels. Engine efficiency has been improved and the interior has been updated. The car will go sale in June.

Nissan released the first images of the third generation Nissan Murano earlier this week, ahead of the car’s debut in New York. The design team at Nissan has clearly tried to give the Murano an overall look that’s similar to the latest Qashqai and X-Trail models.

The car will use a 3.5-litre V6 petrol engine with an automatic gearbox and come in four trim levels. Nissan is yet to decide whether the car will made available to the UK market, as sales of the last model weren’t particularly strong here.

Subaru brought its US specification version of the new Subaru Outback to the show, which goes on sale in America this summer. Naturally, the car previews the version that will eventually come to the UK in 2015.

It’s likely the car will use the same 2.0-litre diesel engine found in the new Subaru Legacy, with Subaru promising that the Outback will blend ‘car-like handling and SUV capability.’

It may surprise some UK readers to discover that the Volkswagen Jetta is the VW Group’s bestseller, owing to huge demand for the car in China and the US.

The latest version of the saloon was officially launched in New York and buyers will be able to choose from two diesel versions and a petrol, all with Volkswagen’s BlueMotion technology for better efficiency.

The design of the car remains restrained but it has been modernised, with full LED lights available as an option and a new interior.