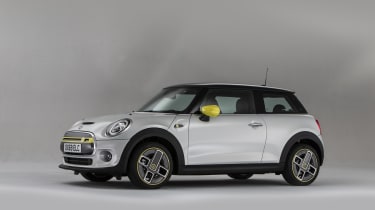 The new MINI Electric has been revealed. It’s a battery-powered version of the three-door MINI hatchback and offers a claimed range of 124 miles. Prices start at £24,400 and you can choose from three trim levels, all of which are on sale now. UK deliveries are scheduled to start in March 2020.

Sharing its 181bhp electric motor with the most powerful BMW i3, the MINI Electric can do 0-62mph in 7.3 seconds - around half a second slower than the petrol Cooper S - before topping out at 93mph. Although it’s called the MINI Electric, this car has a Cooper S badge on the boot to emphasise that the battery and petrol-powered cars offer similar performance.

With its relatively small 32.5kWh battery pack, the MINI EV can manage between 124-144 miles under the WLTP testing cycle. This is much less than established electric cars like the Renault ZOE but a similar figure to the upcoming Honda e. MINI claims that most customers will use the electric version as a second car so the limited range isn’t an issue. Recharging to 80% capacity takes 35 minutes on a DC fast-charger, or 2.5 hours on an 11kW wallbox. However, MINI only supplies a charging cable for a three-pin plug socket as standard, so you’ll need to pay to upgrade unless you don’t mind waiting a few hours for the car to recharge. 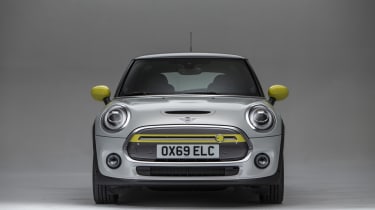 You’ll be able to tell the MINI Electric apart from regular models by its new, smoother bumpers, striking new wheels, yellow ‘E’ badges and ‘Energetic’ yellow highlights. The door mirrors and grille insert come in the same yellow as standard but you can choose grey highlights and different alloy wheels at no extra cost. The MINI EV sits 15mm higher than conventionally fuelled models.

Much is unchanged on the inside but the electric car does get yellow accents, a new infotainment scrolling wheel and an electric handbrake. Replacing the analogue dials behind the steering wheel is a new digital screen.

Three trim levels will be offered but all cars will feature cruise control, air conditioning and a 6.5-inch touchscreen with Apple CarPlay, Android Auto and sat nav. Upgrading to the middle spec brings half-leather seats (heated in the front), keyless entry, a reversing camera and puddle lights, while top-spec cars feature leather upholstery, a larger screen, wireless phone charging and more colour options. It’s worth noting that the base-model cars are only available in silver or grey, while the mid-spec version is also available in black, green and red paint.

MINI claims the new electric model is as groundbreaking as the reinvented MINI hatchback was when it arrived in 2001. It’s been launched in 2019 partly to celebrate the 60th anniversary of the original Mini. While it’s the first electric MINI to reach production, a MINI EV was planned in 2010 but never made it past the development stage.

The new MINI Electric joins the forthcoming Honda e as a compact EV with a range of less than 200 miles. Its arrival emphasises the increasing choice car buyers have when looking at electric cars and the importance of considering how much range you really need from the car you buy. Battery technology is improving but it still holds true that the electric cars capable of the most miles on a single charge are the most expensive; recognising that you don’t need a car with the range or size of a Tesla Model S, Jaguar I-Pace or Audi e-tron could bring an electric car within budget. Some electric cars with ranges of up to 250 miles, such as the Nissan Leaf, are available with two different battery capacities - if you think you can manage with the smaller one, you stand to save thousands of pounds. The MINI Electric is shaping up to be a stylish and relatively affordable electric city car thanks to its modest range.

Read our pre-production review of the MINI Electric, or read our guide to the cheapest electric cars.