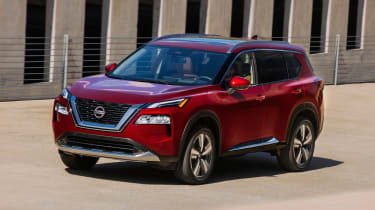 The next-generation Nissan X-Trail SUV has been previewed by the American version of the car, the Nissan Rogue. Its unveiling shows the exterior and interior design, and gives clues about some of the technology that might be on board. The Rogue goes on sale in America in autumn but it’s thought that the current X-Trail will soldier on for two more years in Europe.

Nissan is set to give its biggest SUV a bold new look, partly inspired by the latest Nissan Juke. There are split headlights and daytime running lights for the first time, and a big new grille. Around the back is a little more similar to the current model but the rear lights take on a more angular shape and the rear end overall looks boxier than the X-Trail you can buy now. There are silver scuff plates front and rear but only a small selection of models are likely to get four-wheel drive in the UK.

The new X-Trail will be slightly shorter and lower than the model it’ll replace, while there are a few aerodynamic touches like an active grille shutter to save fuel. LED headlights should be standard-fit, and the X-Trail will get the option of a two-tone colour scheme. 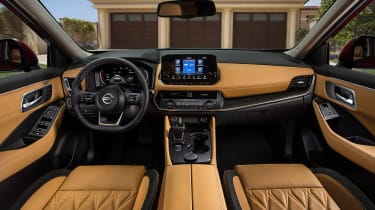 Cabin design has advanced since the current X-Trail was launched, and the once super-modern look now seems a little dated. The US-spec Rogue comes with a large new nine-inch touchscreen poking out of the soft-touch dashboard, a digital display replacing traditional dials and a huge head-up display. It’s far less button-heavy than the current X-Trail, and Nissan has binned all gloss black trim, which now looks a little cheap.

The seven-seat X-Trail will come with plenty of hi-tech features, such as the Nissan ProPilot driver assistance system. Combining adaptive cruise control, stop-and-go functionality and lane-keeping assist, the car will essentially be able to drive itself in some situations. It now uses sat nav data to pre-emptively adjust speed, too. US-spec cars get a huge array of safety tech, including autonomous emergency braking, pedestrian detection, a driver tiredness alert and blind-spot monitoring.

In terms of connectivity, the next-generation Nissan X-Trail will come with Android Auto and wireless Apple CarPlay as standard and a smartphone charging plate. The head-up display is a feature that’s new to the Rogue, although it’s not confirmed for UK cars.

It’s expected that Nissan’s CMF platform will underpin this new X-Trail, as it does the upcoming third-generation Qashqai due later this year. The platform will support hybrid technology for the X-Trail as the manufacturer works to lower the emissions of its products. 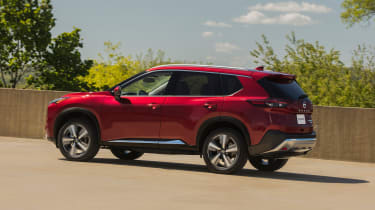 The hybrid powertrain, known as 'ePower', is a system based around a petrol engine that acts as a generator for a battery pack that powers an electric motor. Nissan does have access to more familiar plug-in hybrid tech via its partnership with other brands but bosses have previously said its cars will only use ePower or a fully electric setup.

Cars sold in America get five driving modes, but two of these are off-road biased so probably won’t be fitted to UK-spec two-wheel-drive versions. There’s a new suspension design and quicker steering to make the car a little more agile.

Interested in knowing more about the Nissan SUV range? Click here for our reviews of the current X-Trail, Qashqai and Juke.