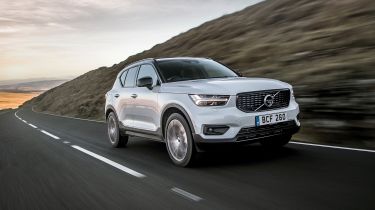 The new Volvo XC40 Recharge T4 has joined the range, giving buyers a second plug-in hybrid option when buying an XC40 SUV. It’s not as powerful as the Recharge T5 PHEV but is a little cheaper and manages the same electric range. Prices start from £39,130 and first customers will take delivery in October 2020.

A 127bhp 1.5-litre three-cylinder petrol engine is borrowed from the entry-level T2 Momentum Core model and is paired with the same 81bhp electric motor from the Recharge T5. Zero-to-62mph takes 8.5 seconds, around a second slower than the Recharge T5.

Most reliable cars to buy this year

The economy figures are identical to the more powerful PHEV, so Volvo claims 134.5mpg and an electric range of 27 miles. CO2 emissions start at 47g/km, so it’ll appeal to company-car drivers in particular thanks to a low 12% Benefit-in-Kind tax bracket.

Volvo seems to have created this model specifically to dip under the £40,000 threshold, meaning buyers don’t have to pay the £325 VED surcharge for cars that cost more than £40k. Both the R-Design and Inscription models start at under £40,000 before options.

At the same time, Volvo has axed all diesel engines from the XC40 range and introduced two mild-hybrid petrol engines. The discontinuation of diesel engines is part of Volvo’s electrification plan, which aims to get more buyers into plug-in hybrid versions or the fully electric XC40 Recharge P8.

If tax-busting is a key priority, the XC40 Recharge T4 will suit. But the T4 isn’t much cheaper than the T5 (the difference is about £1,900), and the T5 is quicker, has four-wheel drive and is just as economical. We don’t think the T4 offers anything particularly new, especially when the BMW X1 xDrive25e is cheaper to start with (prices start at £38,200) and offers more electric range.

The move away from diesel engines seems a little premature, too, and suggests that Volvo is focusing on business users ahead of private buyers. It means that if you can’t stretch to the £39,130 plug-in hybrid - which is £14,000 more than the cheapest XC40 - you can expect no more than 40mpg from your XC40.