Even with a larger boot, the BMW 3 Series Touring is just as sharp as the saloon, which makes it the best-driving executive estate you can buy

All BMW 3 Series Touring models ride and handle well, with precise and not-too-heavy steering. You’re given a good idea of how much grip the front tyres have at all times, and the car tracks straight and true on the motorway. No estate car comes close to the brilliant driving experience of the BMW 3 Series Touring, thanks to a typical BMW rear-wheel-drive set-up combined with powerful brakes, so it feels both agile and very safe.

On 320i petrol and 320d diesel models and above, you can opt for traction-boosting xDrive four-wheel drive if you don’t want to get stranded during the winter months – but this will increase your fuel bills, so make sure you think carefully before you select it on the options list. 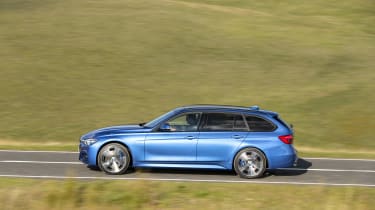 No matter which 3 Series Touring you choose, we reckon the eight-speed automatic gearbox is a worthwhile addition. It changes gear quickly and smoothly and always seems to know exactly which gear you want it to be in. It also has no adverse effect on the car’s CO2, improves fuel economy and, in some cases, reduces the car’s 0-62mph time slightly.

There’s a diesel engine for every occasion in the 3 Series Touring. The range kicks off with the 316d Touring, which is economical, but takes 11.4 seconds to get from 0-62mph, which is rather slow for a pricey BMW. Our favourite all-rounder is the 320d Touring, which offers a great blend of price, pace and economy, getting to 62mph in 7.7 seconds.

However, even the range-topping four-wheel-drive 335d Touring xDrive promises to return about 45mpg and emits 165g/km of CO2. That’s not bad for a car that can carry a great deal of stuff from 0-62mph in 4.9 seconds – making it the fastest model in the 3 Series Touring line-up.

The Touring petrol range starts with the 318i, which uses the same three-cylinder 1.5-litre engine as the BMW 2 Series Active Tourer, BMW X1 SUV and MINI hatchback. It can get from 0-62mph in 9.2 seconds in manual form. If you can’t stomach the idea of a diesel, it makes a decent alternative.