The 3 Series Touring gives you a great driving position, with a seat and steering wheel that can be easily adjusted to make getting comfortable very simple. And, while there are cars out there with a more supple ride, but the BMW 3 Series Touring is far more comfortable over bumps than its stable, sharp handling would suggest.

Sport and M Sport models have the added advantage of optional driving modes to adjust the car’s suspension for a relaxed and composed drive on rough surfaces, but only if the optional adaptive dampers are fitted at a cost of £515 or £790, depending on model. Set it to Comfort and the Touring absorbs bumps and lumps with relative ease, while Sport mode firms up the shock absorbers for a tighter, more agile feel. 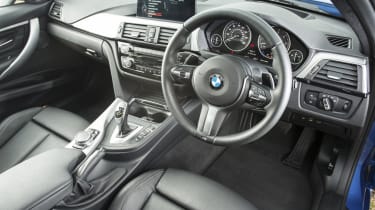 It’s very easy to find your way around the dashboard in a 3 Series Touring, with controls located with such clarity that you instinctively know where to find them. Everything feels beautifully put together, too, so it’ll still feel good when you’re getting into it three years down the line.

BMW’s iDrive infotainment control system is one of the best on the market. It’s logical and easy to operate, without resorting to uncommunicative, fingerprint-prone touchscreens. If you choose any of the infotainment upgrades, such as from Business to Professional navigation with 3D mapping, the control system remains the same, but greater functionality is unlocked.

Every BMW offers the company's 'remote services' feature, which allows you to check aspects of your car's status, including its fuel level, remotely via a smartphone app. You can also use this to operate certain functions, like the ventilation, headlamp flasher and central locking.

The 3 Series Touring also comes with run-flat tyres, which means the space that would normally be taken up by the spare wheel can be used to create a deep hidden compartment beneath the hinged boot floor. 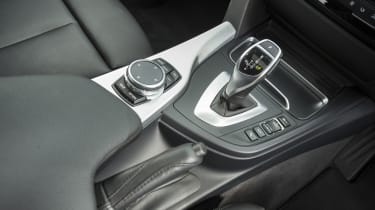 Unlike the four-door 3 Series, the Touring has a folding rear seat that splits 40:20:40, which makes the boot more versatile. Other useful items include lashing hooks in the floor, bag hooks, a folding floor divider, a cargo net, plus extra hooks that allow you to divide the boot from the interior, whether in five-seat or two-seat mode.

The sky’s the limit with BMW option lists, but your car’s resale value is likely to be slightly higher if you go for one of BMW’s upgraded Professional sat-nav systems. You’d also be well advised to choose your 3 Series Touring with metallic paint, which is more desirable to secondhand buyers, and the aforementioned automatic gearbox.