"The BMW 3 Series Touring is a more versatile – and arguably more stylish version of the sporty, economical and classy 3 Series saloon"

The BMW 3 Series Touring estate has cultivated an even more upmarket image than its saloon counterpart, thanks in part to being less directly associated with company-car users. Indeed, when the first versions appeared in the late 1980s, they were often seen sharing driveway space with sports cars, acting as an upmarket family carry-all so the Porsche 911 could be kept for the weekend.

While the 3 Series Touring was alone in its class 30 years ago, BMW’s main rivals Audi and Mercedes have now long had premium compact estate cars of their own, in the shape of the Audi A4 Avant and Mercedes C-Class Estate. And while the Touring has never had the very biggest boot on the market, few estate cars can claim to be half as enjoyable to drive. 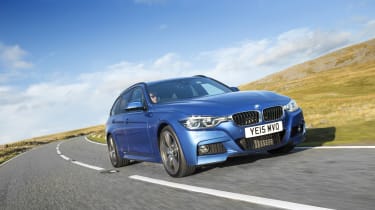 As befits such an important model in BMW’s line-up, the 3 Series Touring has a vast array of engines to choose from depending on where your priorities lie in terms of cost, fuel economy and power. That said, none of the engines disappoints with a poor fuel consumption when you consider the performance on offer.

The most economical model is the 320d EfficientDynamics (ED), which is distinguished by a unique set of 16-inch wheels. It claims official economy of 62.8mpg and attracts a 28% Benefit-in-Kind (BiK) rating for company-car tax. Despite its low running costs, it can still tackle the 0-62mph sprint in 8.3 seconds.

At the other extreme is the petrol BMW 340i Touring, whose 322bhp results in a 5.1-second 0-62mph time – quick enough to worry some fairly serious sports cars. Yet although its 36.7mpg fuel economy won’t win plaudits from Greenpeace, it’s far less thirsty than a car this quick would once have been.

Costing around £15,000 more than the entry-level 318i, though, the 340i is destined to be a rather specialist choice, and better value is found with the mid-range cars. Our favourite – and one of the most capable all-round cars you can buy – is the 320d diesel. Shorn of the EfficientDynamics package, it boasts an extra 26bhp and a reduced 0-62mph time of 7.7 seconds. It can still return 58.9mpg, too, and attracts a 31% BiK rating, thanks in part to the AdBlue emissions reductions equipment that's standard on all BMW diesel engines.

No matter which engine you choose, from behind the wheel, there’s almost no indication you’ve chosen the Touring model, it offers accurate steering, plenty of feeling for the road and almost no body lean in corners. Despite this close connection with the road, bumps and potholes are smoothly dealt with, although the ride does become more jarring if large alloy wheels are fitted.

The manual six-speed gearbox has a solid feel, and is smooth and slick, but the eight-speed automatic is arguably even better, suiting the car well and having little effect on economy figures. For around £1,500 extra, some versions of the 3 Series Touring can be fitted with xDrive, which is BMW’s four-wheel-drive system that improves traction and stability but reduces economy by around 10%. The xDrive set up can only be paired with the eight-speed automatic gearbox. 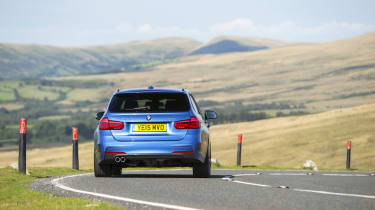 Step inside and the 3 Series convinces with a sturdy, classy dashboard, with everything logically laid-out and easy to find. However, we feel that Audi has moved the game on with its A4, which feels a little more contemporary inside than the rather traditional 3 Series. Front-seat occupants have plenty of room, with lots of adjustment for the driver, but space in the back is a bit tight for adults and a pronounced transmission tunnel means the middle-seat passenger has little foot room.

On paper, the fact the Touring’s 495-litre boot is only 15 litres bigger than the saloon’s doesn’t prevent it from being massively more versatile. The wide tailgate opening and folding rear seats make it far easier to load bulky items. The Touring is measurably less accommodating than its A4 Avant and Passat Estate rivals, though – they boast 505 and 650 litres respectively, so you’ll have to choose between luggage space and driving fun.

While BMWs are highly regarded for their engineering pedigree, this sentiment isn’t quite backed up by our 2018 Driver Power customer satisfaction survey, where the 3 Series came 39th out of 75 models overall. This could be skewed partly by the expectations of BMW customers, but it’s also worth considering that repairs outside the three-year/unlimited-mileage warranty could be pricey. There are no worries about safety, with the 3 Series managing to score five stars out of five in Euro NCAP crash-testing.