The BMW 3 Series Touring has a smaller boot than some rivals, but it’s still big enough to be practical

There’s a decent amount of space for the two front-seat occupants in a BMW 3 Series Touring, along with plenty of adjustment so that both can get comfortable. However, BMW’s seat height adjustment system, which forces you to pull a lever, then move the seat using your bodyweight, is more awkward than those of rivals.

Inside, there are loads of storage bins and cubbies dotted around, which makes the Touring a very practical choice for families doing long journeys. There’s (just) enough space for two people to get comfortable in the rear, as well as room for two child seats to be installed using the ISOFIX mounting points. Getting in and out of the back is reasonably easy, too, because the door openings are a decent size. 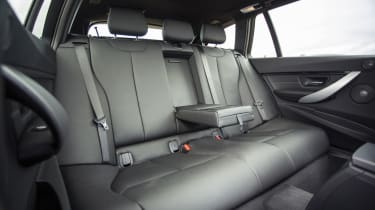 With the standard 40:20:40 split-folding rear seats in place, the 3 Series Touring offers a reasonable 495 litres of boot space – which is (just) more than you get in the Mercedes C-Class Estate, although the Audi A4 Avant and Volkswagen Passat Estate both have bigger boots – the latter by some margin. Fold down the back seats and luggage room expands to an impressive 1,500 litres, so the 3 Series Touring will easily handle virtually any items that your average family can throw at it. 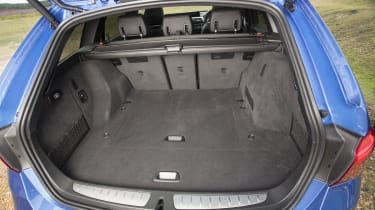 You also get a split-opening powered bootlid that proves to be very handy indeed if you’ve got your hands full of shopping. It lets you access the boot without having to open the whole hatch, as the rear glass opens separately from the rest. Other useful additions include lashing hooks on the boot floor, bag hooks, a folding floor divider, a cargo net and extra hooks that allow you to divide the boot from the interior when you fold the seats down.

All 3 Series Touring models will be capable of towing a healthy weight of between 1,500kg and 1,800kg, depending on which engine you choose – with the diesel engines generally providing better pulling power. A trailer full of garden rubbish will present no problem at all and you could also tow a decent-sized caravan – although we’d recommend that you choose one of the diesel models if you plan to do this regularly. Do note that the BMW advises against using the EfficientDynamics model as a tow car.