Good to drive, but the Mercedes A-Class doesn’t engage its driver like a BMW 1 Series

Drive the Mercedes A-Class in isolation and it comes across as a solid performer. It has plenty of merits, including direct steering and – when fitted with smaller alloy wheels – suspension that deals well with bumpy and broken UK roads. Unlike the BMW 1 Series, which is rear-wheel drive, most Mercedes A-Class models are front-wheel drive, which means they tend to feel less involving than the BMW.

Like all front-wheel-drive cars, the Mercedes can suffer from torque steer – a writhing sensation through the steering wheel under hard acceleration – although this is more pronounced in the A-Class than in rivals such as the Audi A3 and Volkswagen Golf. You can specify 4MATIC four-wheel drive on most models in the range and this makes the car feel planted, but not any more fun to drive. 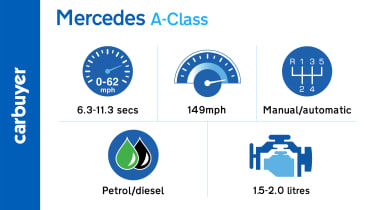 While the A180d diesel is undoubtedly easy on fuel, it’s not quick – the 0-62mph sprint takes a leisurely 11.3 seconds – a figure beaten by its direct rivals from BMW and Audi. We’d expect better performance from a car costing close to £22,000. Spend a bit more and things get significantly better: the 2.1-litre diesel A220d can dispatch with 0-62mph in 7.5 seconds, which makes it well suited to making swift and safe A-road overtakes.

On average, the petrol engines are much more sprightly from 0-62mph. The slowest petrol, the A160, does it in 10.6 seconds with a manual gearbox. Naturally, the more powerful petrols accelerate quicker, with the A250 hitting the magic number in 6.3 seconds, which is a similar time to the Volkswagen Golf GTI. The powerful A45 AMG has a 4.2-second launch time rivals that of a Porsche 911 Carrera 4S.