With SUVs continuing to enjoy huge popularity, there's a risk that other types of car will lose sales. It's clever thinking, then, to produce a car that combines the fuel economy and easygoing nature of a supermini with the adventurous looks and spirit of an SUV, and the Renault Captur does just that. It has paid off too, with the Captur becoming one of the best-selling Renaults in the UK.

Based heavily on the Renault Clio, the Captur makes a lot of sense for anyone torn between a conventional hatchback and an SUV, offering surprising practicality and interior space in a compact package. Its considerable popularity comes as little surprise and it's a formidable opponent to the Vauxhall Mokka, Peugeot 2008 and Fiat 500X, as well as the Jeep Renegade.

Unlike some of the above, the Captur can't be chosen with four-wheel drive, but this is unlikely to put many prospective buyers off. It certainly has the looks of an adventurous mud-plugger, with tough body cladding, muscular curves and bold wheels, while its raised ride height adds road presence as well as providing a great view from its lofty driving position. 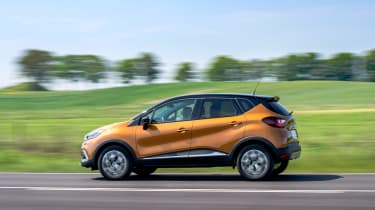 It's not out of its depth on uneven surfaces, either, thanks to its generous ground clearance, but don't be tempted to venture too far off the beaten track or its road-biased tyres will let you down. Stay on the tarmac, though, and the Captur is a pleasure to drive. There are two petrol engines; an 89bhp 0.9-litre that emits 139g/km, but it’s 13.1-second 0-62mph time means it's more at home in town than on the open road. For 2019, a new 1.3-litre engine joined the line-up, with a choice of either 128bhp or 148bhp. They both manage 43mpg and crack the 0-62mph barrier in and around 10 seconds, although the higher-powered version is only available with an automatic gearbox.

Diesel fans can go for an 89bhp 1.5-litre engine with CO2 emissions of 138g/km. Performance figures are comparable to the petrols, but the latter are a good deal quieter and are better suited to those who make frequent short urban journeys.

The Captur feels a lot like a taller Clio on the road, with a slightly smoother ride thanks to that long-travel suspension. Potholes can catch the suspension out – the Peugeot 2008 is better at absorbing violent shocks – but most surfaces are comfortably dealt with. Take it for a spirited blast on a favourite country road and you may wish it was a bit less tall; it leans in bends far more than the Clio. You might wish the steering was a little richer in feel, too – the Captur isn't as instinctive to place on the road as its supermini sister.

The same update that gave the Captur a close family resemblance to the larger Renault Kadjar, as well as C-shaped LED daytime running lights similar to those adorning the latest Renault Megane, also brought improvements to the interior. The list of standard equipment is longer than ever before, there's an infotainment system with Apple CarPlay and Android Auto compatibility, front parking sensors, blind-spot warning and autonomous parking available, as well as a panoramic sunroof. 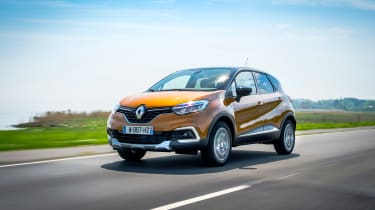 Iconic adds a seven-inch infotainment screen with, climate control, 17-inch wheels and chrome interior trim. From December 2018, all Capturs from Iconic trim onwards feature Apple CarPlay and Android Auto. There are handy storage nets, a reversible boot floor and rear parking sensors. S Edition looks a bit sportier inside and out, and is quite well equipped with LED headlamps, parking sensors and a leather steering wheel. The range-topping GT Line gives the exterior a more rugged look and adds features like a rear view camera and full navigation.

A raised roofline means there’s plenty of headroom in the front and back for adults, with enough legroom for all but the tallest passengers. It’s also possible to move the rear seats to increase knee room or luggage space, adjusting the boot space from 377 to 455 litres. Even in its smallest setting, this is still more luggage room than a Ford Focus or Vauxhall Astra offers.

Due to too few responses, the Renault Captur didn’t feature in our 2019 Driver Power owner satisfaction survey of cars currently on sale in the UK, but it did finish 70th out of the 75 cars ranked in our 2018 survey. A five-star crash-test rating from Euro NCAP means the safety box is checked, too.

It’s easy to see why the first generation Captur is so popular, it’s a stylish and practical model that gives owners the feeling of driving an SUV, but without the associated costs. A revised range for 2018 makes it even more affordable and better equipped too. This will be superseded by a new second generation Captur which will go on sale in early 2020 with more practicality and new technology, including a plug-in hybrid powertrain for the first time.