All Volkswagen Golf models are efficient relative to their performance

Impressive fuel efficiency is one of the Volkswagen Golf’s key selling points – it can compete with most of its rivals in terms of running costs, whether you go for one of the economical diesels or one of the high-performance models. And whichever version of the Golf you go for, it’s guaranteed to hold on to a greater proportion of its value than many of its competitors, as the car’s high-quality image makes it as desirable as ever on the used market. 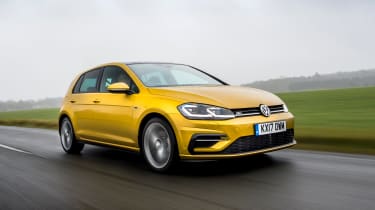 Best in the range for fuel consumption is the 113bhp 1.6-litre TDI diesel engine hooked up to a manual gearbox. While it has enough power for safe motorway driving, features such as an automatic stop-start system help it to deliver 57.6mpg fuel economy.

Emitting as little as 108g/km of CO2, the 1.6-litre diesel costs £145 a year to tax and attracts a 29% Benefit-in-Kind (BiK) charge for company-car drivers. Only the purely electric Volkswagen e-Golf is fully exempt from road tax.

Company-car drivers and motorists expecting to cover fewer than 12,000 miles a year may be better off with a petrol Golf and the 1.0-litre TSI may be just the ticket here, achieving up to 49.6mpg. However, that figure is for the entry-level 84bhp version, which is only available in base S trim. A better bet is the more powerful 113bhp version, which is both noticeably quicker and comes with a six-speed manual rather than the lower powered engine’s five-speed transmission.

If you want even more power, the 129bhp 1.5-litre TSI petrol is more or less just as efficient, with an average combined figure of 47.1mpg; CO2 figures range from 110 to 116 g/km depending on which trim, bodystyle and gearbox combination you choose.

There's also a more powerful 148bhp version of this engine, also with a claimed economy of 47.1mpg with a manual gearbox, or 44.8mpg with a DSG seven-speed automatic. CO2 emissions are between 119 and 123g/km depending on bodystyle and gearbox combinations.

Even the biggest petrol and diesel engines are impressively frugal. The 2.0-litre petrol is only available on the high-performance Golf GTI, but the 2.0-litre diesel can be chosen in Match Edition models and above in 148bhp form. It manages up to 52.3mpg with a seven-speed DSG gearbox.

Diesel fans in search of more power will want the Golf GTD hatchback with the 181bhp version of this engine, which can return up to 49.6mpg.

The 1.0-litre Golf is cheapest to insure, sitting in groups 11-12, while the 1.5-litre petrol spans groups 15-19 depending on the power and trim level. Diesel engines start in group 13 for the 1.6-litre TDI. The higher-performance GTD and GTI Performance variants start in groups 27 and 33 respectively, with the range-topping R in group 39 out of 50.

VW sells the Golf with a three-year/60,000-mile warranty, which is comparable with the likes of the Ford Focus, SEAT Leon and Mazda3. But this has been left looking a bit miserly by the likes of Hyundai, which offers a five-year/unlimited-mileage warranty on the i30. And Kia has set the benchmark in this market with the seven-year/100,000-mile cover it includes with every Ceed. Honda now sells the Golf-rivalling Civic with a three-year/90,000-mile warranty.

Variable service intervals apply to every model in the VW Golf range, which can make it difficult to budget it for maintenance. However, the company offers a pre-paid servicing package to all customers buying a new Golf to cover all routinely scheduled maintenance check-ups for three years or 30,000 miles.