Driving fun is one area in which the Ford Fiesta has got the better of the VW Polo. On a straight road, the VW is quiet and comfortable, but drive down a twisting country road and you soon know where the Fiesta’s skills eclipse those of the Polo.

The Polo’s steering is the main thing that stands between the driver and having a good time. Compared to the Fiesta’s, it’s too light and lacking in feel, so you have little idea of how much grip the front tyres have on the road. The Polo’s suspension is clearly biased towards a smooth ride, but the payoff is quite a lot of body lean in fast corners.

There’s loads of grip and the car never feels unsafe, but the steering doesn’t provide confidence and you’re unlikely to jump in your Polo for the sheer thrill of hustling it along a favourite twisty back road. While this is less true of the Polo GTI, it still feels more like a grown-up grand tourer than a car designed for fun. 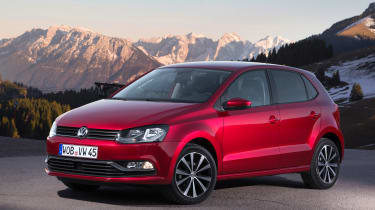 Passengers are far more likely to have a good time in the Polo than the driver; for most trips around town or long journeys on the motorway, the Polo’s smooth ride and calm, quiet interior matter more than make amends for a lack of sporty handling.

The BlueMotion model is fitted with low rolling resistance tyres, which help with fuel economy, and has a different gearing setup in its five-speed manual gearbox compared to the rest of the range. The gear ratios are longer, which means that it will take more time and more speed for you to change gear. The idea is that lower revs means better economy overall, plus the engine should be quieter at motorway speeds.

The basic 1.0-litre petrol engine, while cheap, isn’t very powerful. Its 59bhp will accelerate the Polo from 0-62mph in 15.5 seconds, so you can more or less rule out overtaking slower traffic on busy A-roads.

The 75bhp version of the 1.0-litre petrol engine may not sound a lot quicker, but it cuts 1.2 seconds from the 0-62mph time and feels much more capable on the motorway. There's a turbocharged TSI version of the 1.0-litre engine, too, which launches from 0-62mph in 9.3 seconds and produces 108bhp. That’s enough for a pretty punchy feel, and it’s quite capable at tackling anything from urban streets to sprawling motorway journeys.

The BlueGT – has a turbocharged 1.4-litre petrol engine good for a 0-62mph time of 7.8 seconds, while the Polo GTI flagship manages 0-62mph in 6.7 seconds thanks to its 1.8-litre turbo petrol engine. 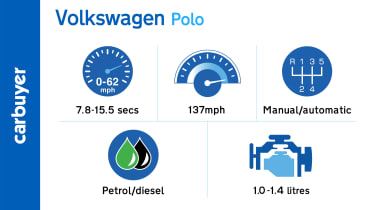 The BlueMotion model has a 1.0-litre turbocharged TSI petrol engine. Although it's not the most economical Polo engine anymore, it delivers a decent 94bhp from lower revs and is very quiet when on the move. The sprint from 0-62mph is over in a very respectable 10.5 seconds and the BlueMotion's top speed is 119mph.

Probably the best-value engine of the bunch is the 89bhp 1.2-litre TSI. It'll go from 0-62mph in a sprightly 10.8 seconds, but it's also quiet and refined, and while it does emit a sporty growl when worked hard, it’s never too noisy.

Go for the more expensive diesel models and you’re not only rewarded with excellent fuel economy, but also a reduced 0-62mph time of 12.9 seconds for 74bhp model and 10.9 seconds for the 89bhp version.