With a range of efficient engines, strong residuals and plenty of standard equipment, the Volkswagen Polo makes lots of financial sense

High running costs aren't something that should be a problem for VW Polo buyers. The entry-level 59bhp 1.0-litre petrol-engined model can return 58.9mpg while emitting just 108g/km of CO2 and the more powerful 74bhp version has the same figures.

Surprisingly, the bigger 89bhp 1.2-litre TSI petrol is more economical than the entry-level 1.0-litre, promising 60.1mpg at the pump. For its combination of more power and better economy, allied to a sensible price, this engine gets our approval.

If you want the compact size of a 1.0-litre engine but a bit more oomph, the R-Line and SE-L models can be had with a 1.0-litre turbocharged TSI engine. It’s actually a little more economical as well as more powerful and can return up to 62.8mpg. The BlueMotion model has switched from diesel power to petrol power and now uses the 1.0-litre TSI engine. It can manage an impressive 67.3mpg and emits 95g/km of CO2. 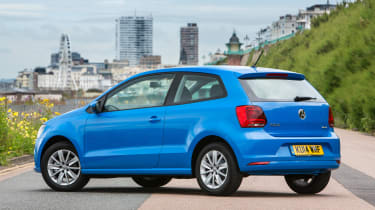 If fuel economy is a greater priority – or if you’re planning to rack up more than 12,000 miles a year – then the 1.4-litre diesel engines are worth a close look. You can choose from 74 and 89bhp versions and both claim identical fuel economy of 74.3mpg and CO2 emissions of 97g/km.

The 148bhp BlueGT uses clever cylinder-on-demand technology that shuts down two of the engine’s four cylinders when you're cruising along gently. It claims remarkable fuel economy of 58.9mpg and emits just 111g/km of CO2 when fitted with the seven-speed DSG automatic gearbox. The six-speed manual version emits 110g/km. 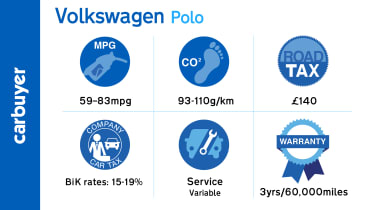 Insurance across the range should also be relatively affordable – ranging from group 6 for the 1.0-litre BlueMotion to group 22 for the 1.4-litre BlueGT, although the sporty Polo GTI will be more expensive.

The VW Polo represents a decent long-term investment, with our experts predicting it'll hold onto its value better than most supermini rivals. After three years and 30,000 miles, you can expect to get around 45% of the car's new value back on a trade-in.

However, some models perform better than others. Worst of the bunch is Polo BlueGT with a DSG gearbox, which will retain just 41% of its value. Much better is the 1.4-litre TDI in SE form, which is calculated to hold onto an excellent 56.7% of its new price.

Volkswagen's warranty could do with being more generous: its three-year/60,000-mile cover looks penny-pinching compared to the five and seven-year plans offered by Hyundai and Kia respectively. Still, as with rival brands, it’s possible to extend the guarantee at extra cost, with four and five-year plans available if you purchase before the factory warranty expires.

Volkswagen has done its bit to keep maintenance and service costs low by offering fixed-price service plans. They run for two years/20,000 miles, three years/30,000 miles or four years/40,000 miles, and as with all VW models, it’s possible to choose between mileage and usage-based servicing.

The former is aimed at lower-mileage drivers and results in the car getting a fixed check-up every 10,000 miles, while the latter is aimed at higher-mileage users and allows the car to run for up to two years or 20,000 miles before a service is due. Sensors on the car will determine exactly when it’s time to visit a dealer.