One thing has always been true of the Suzuki Swift – its diminutive size and light weight makes it a responsive, agile car that begs to be driven enthusiastically. The bad news for Suzuki, though, is that many of its rivals can claim the same thing.

The Swift has nicely weighted steering that never feels inconsistent, so you can confidently point the car wherever you want to go. It tracks through corners accurately, with barely a trace of body lean, which is very rewarding if you’re in the mood for ‘scruff-of-the-neck’ driving. Unfortunately, though, the firm springs and rather basic rear suspension design can often lead to an unsettled ride on rough roads.

Many rivals are far more adept at soaking up bumps than the Swift, without compromising their entertaining nature. 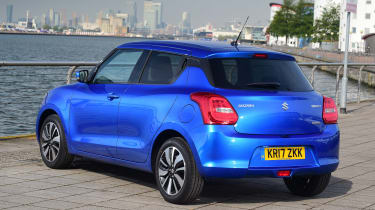 Still, if fun is all you want from your supermini, the Suzuki scores well. Its five-speed gearbox has a pleasingly quick, short movement from gear to gear, making it more enjoyable than the automatic transmission.

Suzuki isn't currently offering the ALLGRIP four-wheel-drive system, which is unlikely to be an issue for most buyers. The Swift doesn’t have enough ground clearance to venture far off and in most situations there's no advantage. Only in really poor weather will you feel the difference, thanks to extra traction on slippery surfaces.

The first latest-generation Suzuki Swift we tested was fitted with the 110bhp 1.0-litre Boosterjet petrol engine, which is very willing and characterful, but isn't currently on sale. When you pull away, it emits an enjoyable burble thanks to its three-cylinder design, yet it’s smooth and muscular despite its small size. It manages 0-62mph in 10.6 seconds.

The Boosterjet name refers to the engine’s turbocharger, which makes it effortless to pull away from a standstill and really helps the Swift feel relaxing to drive. With much of the power on tap before the rev-counter needle reaches 4 on the dial, you can change gear early and don’t have to push the engine hard to make swift progress on the road. Where it’s legal to do so, 80mph equates to 3,000 revs, which should help fuel economy on a motorway cruise. 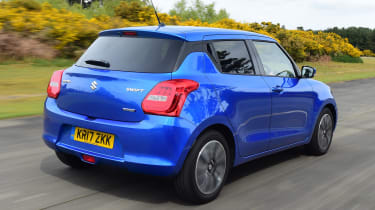 Although this engine makes an appealing sound, you don’t really hear it once you’re up to speed, due to a combination of its relatively subdued nature and the rather strident rush of wind noise when you’re cruising.

The entry-level 1.2-litre Dualjet engine is of more conventional design and less powerful, at 89bhp. This is enough for 0-62mph in 11.9 seconds, though, which should be fine in city traffic. It now comes with Suzuki’s SHVS ‘mild-hybrid’ system as standard. This stores energy created when you brake to lessen the effort made by the electrical system when you accelerate. In theory, it should have little effect on how the car feels to drive.