“Although it’s based on a van, the Volkswagen Caddy Life is a very practical, well built family car”

The Volkswagen Caddy Life sits in a small category of cars that offer an array of real-world usability and practicality in a car with similar dimensions to a conventional family hatchback. The Caddy Life is the passenger-carrying version of the Volkswagen Caddy van. The Caddy has been designed to drive similarly to a car, meaning it doen’t feel large or intimidating to drive.

If you’ve considered a Volkswagen Golf hatchback or the larger estate or SV models but you need more space, then the Caddy Life could be ideal for you. Although this market sector is relatively small, the Caddy Life is billed as a direct competitor against the likes of the Peugeot Rifter, Citroen Berlingo, Ford Tourneo Connect and the good-value but now discontinued Fiat Doblo.

Compared to its boxy looking rivals, the Caddy Life is undeniably a more-stylish machine. It has the same distinctive nose design as the Volkswagen Tiguan SUV and a slightly less obviously ‘commercial vehicle’ image than some of its rivals with the Caddy Life’s panel van origins offering plenty of interior space. For those who want more space, VW offers the Caddy Maxi Life, which is 40cm longer and has seven seats as standard.

The engine range is simplicity itself, consisting of just a 1.0-litre TSI petrol and 2.0-litre TDI diesel, both of which have 101bhp. The diesel engines make a lot of sense for those who rack up high annual mileages while the petrol is a better choice if you plan on mostly short or local trips.

Inside, the Caddy Life offers much of the high-quality finish we’ve become accustomed to in the Volkswagen car range. The rear sliding doors offer full height access to the rear seats, and the sizeable, square passenger space provides loads of legroom and headroom for all and you can fold the seats away to carry truly immense loads.

The extra bulk does mean the Caddy is not quite as responsive to drive as a Golf – and it does lack some of that car’s cachet. The only real sticking point is price. If practicality is all you need, the Fiat and Citroen mentioned above do the same job for less money. But neither of those have the sought-after VW badge on their nose.

The Caddy Life diesel is the most economical version

Because of its slightly boxy design, the Caddy Life can’t quite match the fuel-efficiency of other cars in the Volkswagen range – although it’s by no means disastrously expensive to run. 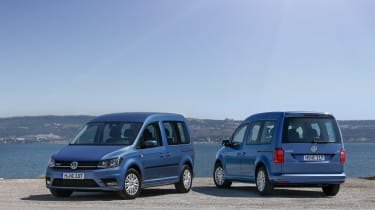 The 102bhp 2.0-litre diesel engine returns up to 51.4mpg (49.6mpg in the Caddy Life Maxi), with 144-152g/km CO2 emissions, and adding the DSG automatic gearbox cuts fuel-efficiency by around 4mpg. Despite being half the size, the 1.0-litre petrol is slightly thirstier, returning up to 40.4mpg (39.2mpg for the Maxi). This engine is also the least efficient of the range, with the Caddy Life emitting 159-169g/km of CO2, rising to 164-172g/km for the larger Caddy Maxi Life model.

If your Caddy Life is registered as a private car, you’ll pay £150 a year for road tax.

The 101bhp 2.0-litre diesel is the engine we recommend as the best all-rounder. While a 0-62mph time of 12.9 seconds is fairly pedestrian, it cruises smoothly and there’s plenty of pulling power for motorway driving or when hauling a heavy load. A six-speed DSG gearbox is also available for this engine, making the Caddy Life more relaxing to drive in heavy traffic.

A 1.0-litre petrol might seem small - especially in the seven-seat Caddy Maxi Life version - but it has the same 101bhp as the diesel and actually cuts the 0-62mph dash to 12.1 seconds. It doesn't have quite the same pulling power as the diesel, though, so it's best suited to nipping around with a few passengers.

The Caddy Life is a good motorway car that covers distances with ease, although wind noise is slightly more pronounced than it is in a conventional car. The manual gearboxes are smooth and easy to live with, while the DSG automatic changes gears quickly and smoothly once upto pace, but can be slightly jerky at parking speeds.

The Caddy Life feels solid and robust, if a little utilitarian

Volkswagen understands that Caddy Life buyers are after ultimate practicality rather than a plush interior, but the manufacturer has used parts from its cars rather than its commercial vehicles inside. That means the dashboard is extremely well built – even if there are some scratchy plastics used in places.

The Caddy Life is generally comfortable, with only the largest potholes causing jolts inside. Considering the amount of space on offer, the Caddy life has the potential to become an echo chamber, but it actually stays fairly quiet inside. The diesel can occasionally be noisy if you work it particularly hard, but that’s also true of the car’s rivals. 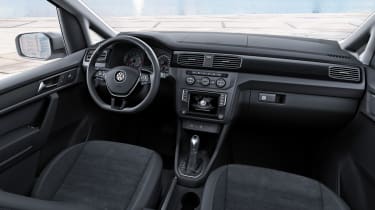 In terms of equipment, the Caddy Life is reasonably well kitted-out, with all models featuring a five-inch touchscreen infotainment system, a DAB radio and Bluetooth phone connectivity, as well as a heated windscreen for the diesel version.

Seven seats are standard with the Caddy Maxi Life, while the five-seat Caddy Life can have two extra seats added to its standard five as an option. You can also upgrade the infotainment system for around £900, and add convenience features such as adaptive cruise control (£300) and a set of rear parking sensors and rear-view camera (£600).

Although Caddy Life customers have to sacrifice some comfort compared to traditional people carriers like the Volkswagen Touran, the Caddy Life makes up for this to an extent with its huge practicality.

All passengers get plenty of headroom and there are myriad storage cubbies dotted around the interior. Rear-seat passengers have plenty of room, and the sliding doors make access to the rear particularly easy. Any middle rear-seat passenger is likely to want for legroom due to a pronounced hump in the floor, but this is a common problem in many cars.

The second row of seats is 60:40 split-folding, while the Caddy Maxi Life version offers seven seats as standard (you can have seven seats in the Caddy Life, too, but it obviously has less room to spare when this option is installed). Meanwhile, a massive tailgate makes loading suitcases easy and a luggage capacity of 2,850 litres (with the rear seats folded) is simply enormous, even if the Peugeot Partner Tepee has a slightly bigger boot.

The Caddy Maxi Life offers 3,880 litres of storage space – although you’ll have to remove the second and third row of seats to make use of this space, which isn’t particularly convenient.

Because it uses the same mechanical underpinnings as the previous generation car, the latest Caddy Life should be a robust and reliable car. Similarly, the engines offered are used throughout the VW range. Volkswagen’s 17th-place finish (out of 30 manufacturers) in our 2019 Driver Power customer satisfaction survey is a solid result that should reassure potential customers significant drop from fifth in 2018.

The Caddy Life’s four out of five star rating in its Euro NCAP safety tests is a respectable result for a car of this type, although five stars in increasingly becoming the norm these days. Anti-lock brakes, electronic stability control and a tyre-pressure monitoring system all feature as standard, while higher-spec versions come with side and curtain airbags.

Volkswagen also claims to be the first manufacturer to offer autonomous braking as an option across its van range, in a move that should help prevent low-speed collisions. Customers can also specify a reversing camera, Bi-xenon headlights, adaptive cruise control and an active parking assistance system. 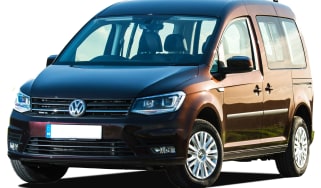 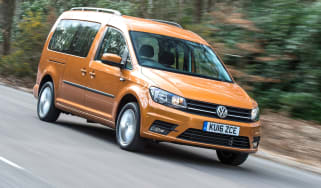 "If you want space above all else, the Volkswagen Caddy Maxi Life has it in abundance. There's room for seven people and their luggage."
Skip to ContentSkip to Footer