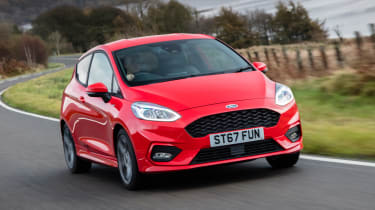 In the late 1990s, a clever Ford engineering team transformed the previously staid, unadventurous Fiesta into a class leader for handling precision and driving fun. Since then, the model has largely retained its crown as the most entertaining supermini to drive – although today’s rivals (most notably the SEAT Ibiza) run it seriously close.

To make sure its engaging manners remain intact, the latest car’s floorplan has evolved directly from that of the previous model, but with much attention to construction to make it far stiffer than before. The front wheels are now 30mm wider apart for greater stability in corners and Ford claims front-end modifications bring better steering feel and sharper responses. The company also claims a 10% increase in cornering grip, with electronic torque vectoring that makes tiny brake applications to an inside front wheel for enhanced stability – and whether this clever technology really helps or not, we’re delighted to confirm that the latest Fiesta is an absolute hoot to drive.

In the ST-Line models, the steering feels lighter than that of the previous model but with no loss in feel or feedback and the car will obediently follow your chosen line through a corner. There’s bags of grip and very little body lean, so you can corner quickly with more confidence than the standard versions, and even dedicated hotted-up superminis like the Suzuki Swift Sport and Volkswagen up! GTI. Unlike some superminis, encountering a bump mid-corner is unlikely to throw the Fiesta off course, either. Despite the ST-Line wearing larger 17-inch alloy wheels, its suspension is still composed and rides well on all but the worst roads, even taking the sting out of most potholes.

Many will appreciate that the latest model hasn’t lost its playful nature, either – experienced drivers will find that the Fiesta’s balance can be adjusted in corner with the accelerator as much as with the steering in true hot-hatchback style – even if your budget can’t stretch to the cracking Fiesta ST.

Appropriately, the braking system has seen improvement over the previous model – all Fiestas with 99bhp or more are fitted with rear disc brakes. The gearchange action is unlikely to disappoint, either – the six-speed manual gearbox that comes with all EcoBoost engines has such a fast, smooth shift you might find yourself making extra gearchanges simply for fun.

In late 2020, Ford removed the diesel engine from the Fiesta range due to low sales. 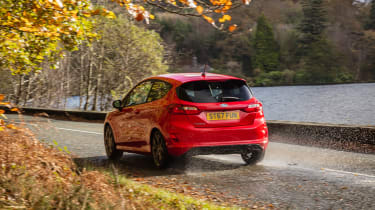 Entry-level Fiestas were previously fitted with a 1.1-litre Ti-VCT engine but it was ponderously slow and has now been replaced by the 94bhp 1.0-litre EcoBoost petrol. It completes the 0-62mph sprint much quicker, in 10.6 seconds. The 123bhp version, mated to a new and improved automatic gearbox, cuts that time to 9.9 seconds.

Ford has finally electrified some of the Fiesta’s EcoBoost petrol engines. First shown in the Ford Puma SUV, the 1.0-litre engine is available with mild-hybrid assistance for the 123 and 153bhp versions. Energy usually lost in braking is captured and stored in a small battery, which allows the stop-start system to cut in sooner than you might expect. The hybrid tech also powers the car’s ancillaries, like the radio, and slightly improves acceleration.

The benchmark 0-62mph figure is dealt with in 9.4 seconds for the 123bhp model, while the range-topping 153bhp engine can do it in 8.9 seconds, making it feel like a mini Fiesta ST.