Low running costs have always been a key part of the Fiesta’s appeal, but Ford clearly hasn’t rested on its laurels for the latest model. CO2 emissions and fuel consumption are both competitive, while insurance and servicing are competitively priced.

The fuel-economy champion in the latest Fiesta range is the 84bhp 1.5-litre diesel. It's claimed to return up to 62.8-65.7mpg, supported by low CO2 emissions figures of 112-119g/km depending on specification. The latter figure results in a mid-range banding for Benefit-in-Kind (BiK) company-car tax.

The diesel model certainly makes sense for anyone covering more than 12,000 miles a year, but lower-mileage drivers might find a petrol more cost-effective in the long run. The 1.1-litre three-cylinder engine is the cheapest but not quite the most economical. It has 74bhp and no turbocharger, returning up to 53.3mpg and CO2 emissions of 121g/km for a fairly low BiK rating. You might end up having to rev it quite hard though, which’ll hurt fuel efficiency. 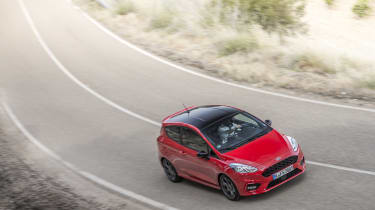 If you can afford it (and the slightly higher insurance costs), we’d recommend going for Ford’s excellent 94bhp 1.0-litre EcoBoost engine, which is slightly more economical at 52.3-55.4mpg. Its CO2 emissions are lower, too, at 116-124g/km, lowering its BiK rating as a result. Impressively, these figures are exactly the same on the 153bhp mild-hybrid version, and the 123bhp hybrid engine is claimed to return a very impressive 52.3-56.5mpg.

If you need an automatic gearbox, you’ll be slightly penalised at the pumps and on your monthly company-car tax bill. Only available with the 123bhp EcoBoost engine, the new seven-speed dual-clutch automatic reduces overall economy to 47.9-49.6mpg, with CO2 emissions increasing to 129-134g/km for a higher BiK liability. If you’re after an automatic Fiesta, make sure it’s a seven-speed; the discontinued six-speed auto could only manage 42.2mpg.

Road tax for non-hybrid Fiesta models costs £150 a year. The mild-hybrid versions are a little cheaper at £140.

Insurance groups for the new Fiesta range from group four for entry-level 74bhp 1.1-litre Trend petrol models to 16 for top Vignale and ST-Line versions. It’s too early to see which groups the new mild-hybrid models are in but the 99bhp engine previously offered is in group 10. The most expensive version to insure is the Fiesta ST, which sits in group 28, whichever version or options you choose.

Ford has the most expansive UK dealer network of any carmaker, so there’s rarely a branch far from home. This means routine servicing should be convenient – if not always the cheapest. Expect the latest Fiesta to require servicing annually, with conditions varying between models – your owner’s handbook will confirm which regime your car and engine belong to. Ford can offer a pre-paid servicing package to cover your first two or three services – ask your dealer to recommend a plan that suits your circumstances.

The standard Ford UK warranty is three years or 60,000 miles – the same as provided with the Fiesta’s rivals from Volkswagen, Skoda and SEAT. It’s markedly less generous than the five-year/unlimited-mileage policy provided with the Hyundai i10 and Toyota Yaris, though, and nor can it match the seven-year/100,000-mile policy that covers the Kia Rio. Ford does offer you the opportunity to extend your Fiesta’s warranty to four or five years, at extra cost.